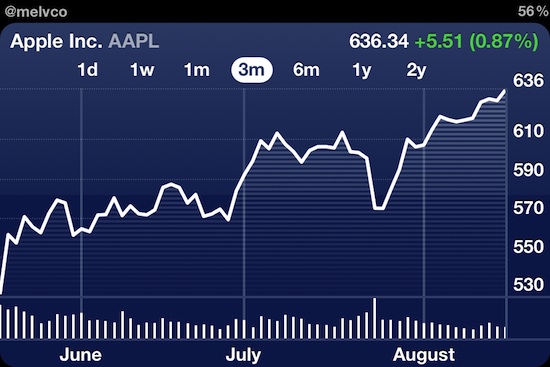 Apple’s stock price has been on a bit of a roller coaster over the past 6 months. After nearly touching $650 during a mid-day spike back in April, it plummeted below $600, and has hovered around that mark ever since.

But good news for investors, it looks like AAPL is back on the rise again. Over the past few weeks the stock has climbed back above the $600 mark, and today, it closed at an all-time high of $636.34 per share…

Why the turnaround? Well if you’ve been paying attention to the rumor mill lately, you’re aware that Apple is expected to host a major media event next month, where it’s rumored to be unveiling a laundry list of new products, including a refreshed iPhone and iPod touch, as well as a new, smaller tablet.

But that’s not the only factor. Apple also made good on its promise today, paying out its first stock dividend since 1995. Investors, who have owned stock since at least Monday, were paid out a solid $2.65 per share.

Expect AAPL to continue to be erratic over the next few months, as Apple is expected to announce another low quarter in October due to consumer anticipation for new products. But after that, the sky is the limit.