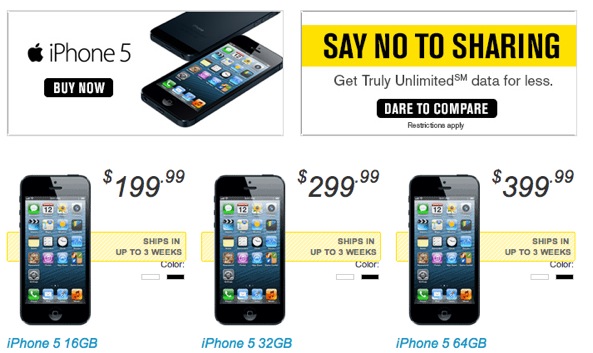 Oh my! The iPhone 5 has officially gone on sale this morning at 8am in the United States and eight oversea markets and already U.S. carrier Sprint has burned through its initial allotment of devices. The company just reported it sold out of the iPhone 5 at many of its retail stores on East Coast, just hours after the device went on sale. The stores will remain “seriously constrained” until Sprint receives additional devices from Apple…

At this time, the majority of East Coast Sprint-branded retail stores are seriously constrained or sold out of iPhone 5 inventory provided to us by Apple. Our stores will be resupplied as soon as additional devices are received from Apple.

To help with high demand, the carrier has a wait list where customers can buy a $50 gift card and secure their spot when the next batch of devices become available.

Best Buy could be next to experience a rather quick sell out.

And how about this guy stealing over $240,000 worth of iPhone 5 units on the eve of launch?

At any rate, this ain’t bad for the “boring” iPhone 5, wouldn’t you agree?

By the way, Sprint and Verizon don’t support simultaneous voice and data on LTE. Furthermore, Sprint’s implementation of HD Audio is not compatible with the iPhone 5.

According to The Next Web Australia, wideband audio support on the iPhone 5 results in a cleaner, clearer and sharper sound during voice calls.

Note that this feature requires support on your carrier’s end.

The iPhone 5 also has three microphones for better noise cancellation and an improved speaker/earpiece design.

As for Sprint, fell free to tell us in comments about iPhone 5 availability at Sprint stores in your area.