Perhaps Samsung was overly confident in nice numbers its flagship Galaxy SIII handset’s been putting or maybe its silly anti-iPhone newspaper ad has backfired, but the South Korean conglomerate appears to have found itself on the receiving end this time around.

A trivial question posted on Samsung Mobile’s official Facebook page has produced a ton of unexpected answers favoring Apple’s new iPhone 5. Rubbing salt into wound, an unrelated survey has also revealed that nearly a whopping two-thirds of polled users in Australia are considering to jump ship because they are lusting after the iPhone 5…

If you could only take one electronic device on a deserted island, what would it be?

Turns out many people would take the iPhone 5 rather than a Samsung device. Note that post date reads September 7, five days before Apple introduced the iPhone 5. 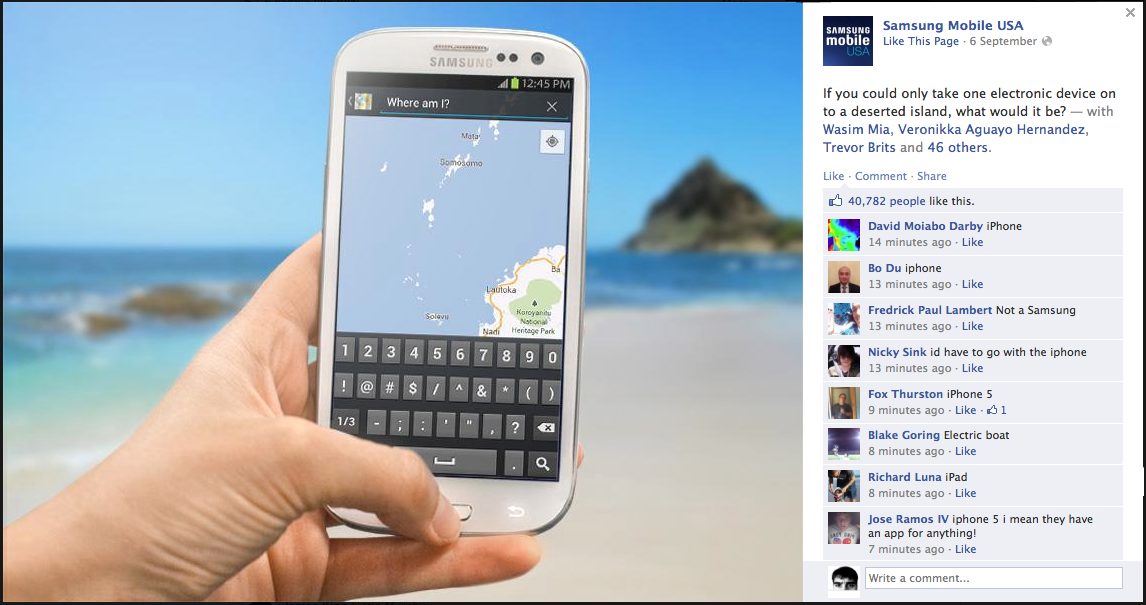 Samsung marketing at its finest. Image via Thomas Lampo.

Perhaps Samsung should have asked this question in March 2013?

On the other hand, the overwhelming majority of responses clearly favor Apple. At post time, I could count 50 out of 60 most recent responses who said a desert island device of their choice would be the iPhone. More than ten thousand people commented on that post, mind you.

Some of the answers:

Apple iPhone … Any model. The original iPhone is still better than any Samsung product I’ve ever purchased.

This one sums it up best:

It doesn’t take a genius indeed.

And in Australia, a new poll of nearly 1,400 users by finder.com found out that 63 percent of Samsung customers are considering switching to the new iPhone 5. An astounding 80.6 percent of all respondents said they were planning to buy Apple’s latest phone.

Nielsen recently reported that one out of four Americans now have a smartphone, with one in three smartphone owners rocking an iPhone.

What’s your read, did Apple fanboys trolled the comments or is this just a case of Samsung tasting its own medicine?