Angry Birds spinoff called Bad Piggies is slated to arrive on September 27 for iOS, Android and the Mac, but Rovio still wouldn’t reveal gameplay video. Luckily, an exclusive hands-on by Yahoo! Games shows us the game’s mechanics which takes cues from Amazing Alex, another physics-based game from Rovio.

This means Bad Piggies tasks you with building all sorts of funny vehicles and flying aircraft so that the pigs can steal more eggs. Contrast this to smashing things up in the Angry Birds series. That being said, the safest way to think about Bad Piggies is as the sibling of Angry Birds rather than its sequel. Check out exclusive gameplay footage right below…

Ben Silverman, in an exclusive hands on for Yahoo! Games, writes:

You’ll craft all sorts of shoddy vehicles, from rickety flying machines to creaky jalopies, and then steer your hunk of junk through winding courses as you try to “three-star” the levels.

While building vehicles might sound a lot more complicated than the simple flinging action in Angry Birds, an intuitive blueprint mode lets you drag and drop parts quickly and easily. 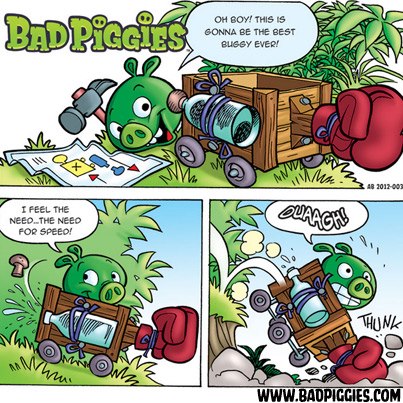 Rovio’s vice president of Games was quoted as saying:

As far as the gameplay goes, Bad Piggies and Angry Birds are complete opposites. Angry Birds smash things up, Bad Piggies build stuff. The pigs are all about making plans and building things, even – and especially – when they don’t work!

Hm, sounds a lot like the stuff Wile E. Coyote used to buy from ACME, Inc.

This is a long-term commitment. This is the sibling of Angry Birds, and it will get a lot of push over time.

The clip is in Flash so talk to Yahoo! Games (guess they didn’t get the memo) if you see empty space on your iOS device.

We first heard back in July that Rovio was working on an Angry Birds sequel that will focus on the pigs. Based on what little information has been released, the upcoming game turns the formula on its head by challenging you to to protect the eggs you’ve grabbed from the birds.

Revealing the pigs’ side of the story should feel familiar because Bad Piggies rely on the usual assortment of catapults, wooden and stone structures and other typical Angry Birds items, which should be fun when augmented with the building angle to it.

I will be giving Bad Piggies a try as I’ve grown tired of just smashing the structures in Angry Birds.

Is Angry Birds a timeless franchise or a passing fad?