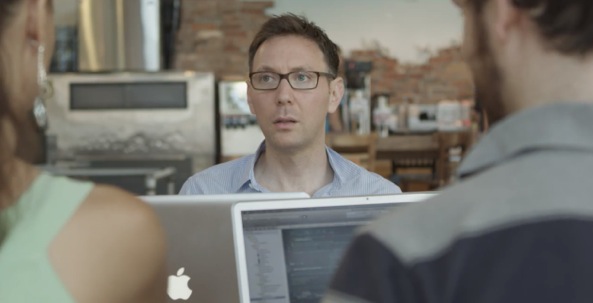 Apple commands cult-like following and rivals like Samsung and Motorola (Verizon, too, in its pre-iPhone days) were quick to isolate Apple’s core base as both its biggest advantage and a major PR vulnerability. If you believe a series of anti-Apple ads by Samsung, people who stand in the line for a new iPhone are weirdos collectively known as iSheep.

The funny videos that rationalize on Apple’s behalf blew up in no time and became a trending topic on social media sites, racking up nearly a million views on YouTube in just a couple days, here’s how he went about doing them…

Apple’s former marketing wizard Ken Segall (he coined the iMac name, contributed to the “Think Different” campaign and authored the “Insanely Simple” book on Apple) published an interesting post (via MacStories) over at his personal blog which details how the project came to be.

Rose, who also acts in the clips, teamed up with long-time friend and cinematographer/editor Andrew Baird to make his creative concept a reality.

• they wrote over 100 lines and recorded all of them at each location, and improvised as well
• the resulting footage ran at over eight hours and had to be whittled down to just a few minutes
• the videos took one day of location scouting, one day of writing, 2.5 days of shooting and five days of editing
• almost every cast member seen in the clips was picked up on the fly
• one of the extras got so into it that she joined the team as assistant director and ended up managing the whole production process

Scott is no stranger to the Apple world, having been programming Macs since he was 13. He spent six years traveling as a speaker for Apple at various store openings and events. Currently, he’s a Mac consultant and Filemaker Pro developer.

Fortunately, the nerd side of Scott is nicely balanced by the actor/comedian side. He’s good at observing the truths in human behavior, including his own. It was the passion he observed for and against Apple that led to the idea of this video.

Rose only meant to poke fun at those who blindly defend Apple and conceived the project to “highlight both the love and hate that we carry for Apple”, he explains:

We are in love with Apple and have a deep passion for Apple, but in a loving relationship you have to take the good with the bad. Sometimes we agree with Apple, sometimes we don’t.

But the best way to get through these sorts of relationship disagreements is with humor! Sometimes you just have to poke fun at yourselves to keep the relationship peaceful.

He’s got more nice words about Apple, but I ain’t spoiling the fun so check out the Ken Segall’s Observatory blog for the full story.

Here’s the first clip in the series.

And here’s another one.

You know you’re a fanboy when you’re caught saying any of these things.

Did you find the clips funny?

It’s always good to be able to laugh at ourselves, right?