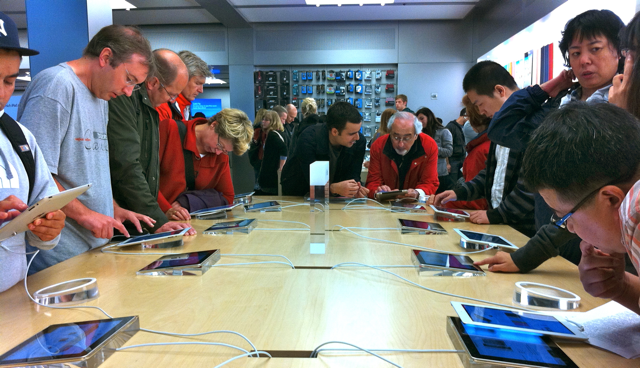 Sometimes delays are good. Apple is expected to release eight new products during September and October, delayed from an earlier introduction due to production problems, an analyst wrote Friday. Although most consumers know Apple will unleash the iPhone 5 in September, followed by a 7-inch iPad in October, the Cupertino, Calif. firm reportedly may also unveil a new iPod, MacBook Pro and iMac.

Analyst Ming-Chi Kuo of KGI Securities said along with the iPhone 5, September will see a redesigned 13-inch MacBook Pro with Retina display with an entry price between $1,100 and $1,300. Next month will also see a new iPod touch…

New technology used in the upcoming products caused the devices to be delayed from their expected second quarter or early third quarter release timetables, the analyst told investors. Each product includes technology that created problems for suppliers.

We’ve reported on problems Sharp is facing producing the 4-inch iPhone 5 display which embeds touch-sensors, rather than adding a touch-sensor layer. The so-called iPad “mini” has seen production slow due to the unit’s “very thin panel module.”

The tablet Kuo describes only as the “new iPad” will include a new 9-pin dock connector, a feature shared with the upcoming iPhone, iPad mini and new iPod touch.

Both the iPod touch and iPod nano will be redesigned with the nano featuring the ability to wirelessly download material from the iTunes Store and iCloud, the analyst claims. The need to fit a Wi-Fi chip in the tiny nano is what delayed the device until mid-October, Kuo said.

Both laptop and desktop users can anticipate new products during the all-important year-end period, as well. The 13-inch MacBook Pro will be redesigned, featuring the fantastic Retina display, as well as a starter price of $1,100. The new pricing makes Kuo question whether Apple can churn out enough to keep up with the demand.

The venerable iMac desktop unit will also get a facelift. Although it won’t get the Retina display, the device will get new lamination expected to improve the display. The analyst caution that the 27-inch makeover may be announced after the 21.5-inch version.

Apple’s product windfall should also counter speculation Amazon may unveil a family of new Kindles at next week’s event. The online retailer Thursday announced it had sold out of its Kindle Fire tablet. Apple’s upcoming 7-inch iPad is widely viewed as a way to counter the threat from smaller devices, including Microsoft’s Surface.