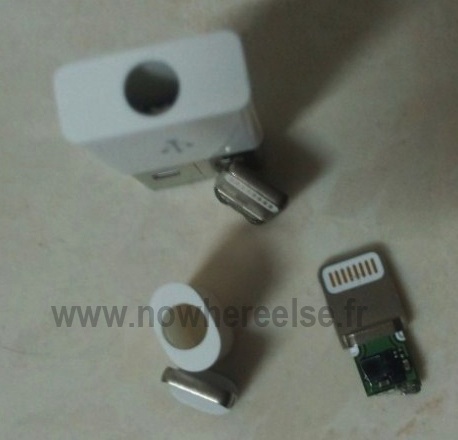 As you know, Apple is planning to deploy a much smaller dock connector with MagSafe-like functionality across all future iOS devices this fall. And contrary to Reuters calling for a 19-pin design, purported photos from two days ago show fewer pins and noticeably smaller design compared to your regular USB connector.

And now, a new report sheds more light on the features the new I/O will provide, including faster data transfer and orientation independence…

The 8 gold contacts seen on one side of the male plug in recently leaked photos of the connector are simply repeated on the flip side. They’re reportedly joined by the surrounding aluminum-colored metal shell of the connector, which will similarly serve as a functional contact, bringing the total number of pins to 9.

The new connector will also deliver a number of welcomed enhancements for consumers, according to people familiar with the design, one of which will be its orientation independence when plugged into any one of Apple’s future iOS devices.

It’ll be just like with the MagSafe power cord for Mac notebooks in that every orientation will be the correct one. And if leaked images represent the real deal, the new connector will be approximately one-third the size of Apple’s existing 30-pin dock connector, now a decade old.

Apple will reportedly provide an adapter to help with the transition to the miniaturized I/O.

Judging by a metal ring inside the casing cutout, seen in the image above, the cable could attach magnetically.

This begs the question whether makers will be required to design future accessories with this functionality in mind.

A year ago, Apple sued HyperMac for providing a MagSafe-compatible cord with their battery packs for Apple’s notebooks.

Apple holds a number of MagSafe-related patents so it’ll be interesting seeing how the shrunken down dock connector affects the accessories industry.

Are you excited about the new connector, its MagSafe-like functionality and other perks it reportedly provides?