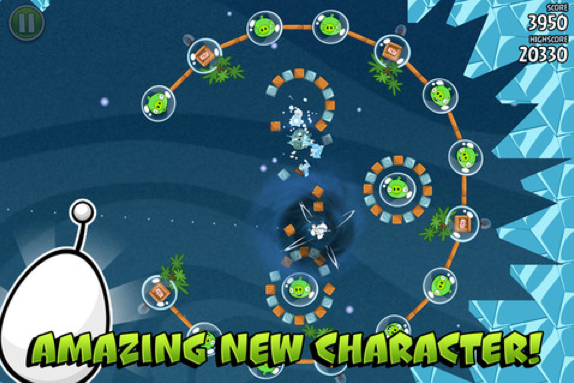 Hot on the heels of their Angry Birds Seasons update, Rovio has pushed out a new version of its Angry Birds Space game. The studio once again teamed up with NASA for what it calls the most “epic episode” yet.

The update, as most of them do in the Angry Birds series, brings about new levels — 20 of them actually, set on Mars. It also includes a new character, and some exclusive content regarding NASA missions…

“NASA and Angry Birds team up for the most epic episode yet! The piggies have hijacked the Curiosity Mars Rover — but instead of searching for ice crystals, they’re looking for eggs!

Blast through 20 fiery levels on the red planet, plus two antenna egg levels!

According to a recent teaser posted on Rovio’s YouTube channel, this is just the beginning. The team has some big plans for its Birds in regards to its Space series and the Red Planet.

And that’s not all the studio has on its plate. Recently we learned that it was going to be teaming up with the American punk band Green Day for a musical episode of Angry Birds Friends, and it’s also said to be working on an all-new game revolving around the pigs and their perspectives.

Some folks feel the Angry Birds franchise is getting a bit long-in-the-tooth, but it continues to maintain a spot in the App Store’s top 10 list. In fact, it has two titles in the top 25.

Anyway, if you’re interested in grabbing the latest episode of Angry Birds Space, it’s available in the App Store for just $0.99.