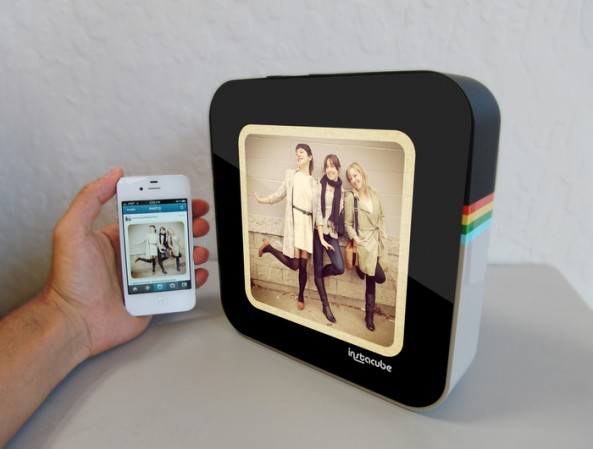 Over the past two years, Instagram has provided a mobile platform for millions of people to share filtered photos of everything from sunsets to cups of coffee. And yes, even food.

And now, the folks over at D2M are trying to provide a way for you to share these photos in a different way, with their Android-based, Instagram feeding photo frame…

The Instacube is essentially a 7.5-inch digital picture fame that runs on a custom version of Android OS. It has a 6.5-inch, 600×600 capacitive touch screen, an ARM processor and 4GB of internal memory. It also has 256MB of RAM and built-in 802.11b/g/n WiFi.

It uses all of these specs to deliver you your Instagrams at full resolution. Simply plug in Instacube, connect it to your Wi-Fi network, and log into your Instagram account. You can use the touch screen to browse through your photos, and it even has a physcial “Like” button.

If the video didn’t tip you off, Instacube is a Kickstarter project. The D2M team is trying to raise $250,000 to take their idea to the next level, and they shouldn’t have any problem doing so. With 30 days left, the project has already received $145,000 from 1,240 backers.

For those of you who are interested in the Instacube, you can preorder yours through Kickstarter for just $149, or two of them for $199. Unfortunately they aren’t shipping until March 2013.

What do you think of the Instacube?