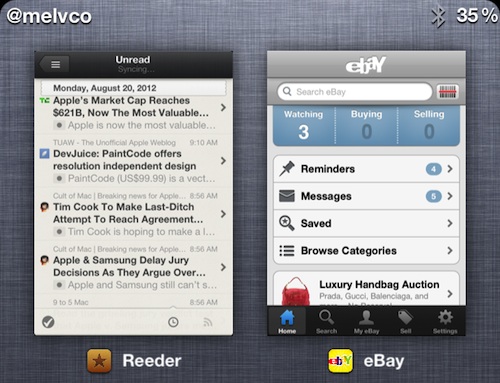 Replacement app switchers have long-since been a favorite for jailbreak developers. Because while Apple’s own implementation is solid, it’s pretty basic, and leaves a lot of room for improvement.

We’ve seen a number of these app switchers recently — tweaks like Imperium and Aero, to name a few. And today, we’re adding another one to that list. Ladies and gentlemen, meet MissionBoard…

MissionBoard is a new tweak that essentially replaces your app switcher. Instead of the stock version, which reveals a horizontal scrolling list of all of your most recently used icons, it shows full screenshots of those apps in a vertical scrolling list. It reminds me a bit of Multifl0w or CardSwitcher.

In theory, MissionBoard sounds great. But something gets lost in the execution. I’ve run into a couple of problems while testing the tweak that will likely guarantee its removal after this review.

For starters, it’s slow. Even my iPhone 4S struggles to smoothly scroll through the list of open apps. There’s also no way to close down apps from this list (unless I’m missing something), which seems like a gross oversight. And finally, it’s a little annoying that you can’t set its Activator method as the stock Double Home button press. If you do, you’ll end up seeing both it and the stock app switcher.

But I’ll admit it looks cool, and it’s definitely different. Which for some people may be enough. I just use my iPhone far too much to worry about anything slowing me down. However, if you’re interested, I urge you to try MissionBoard out for yourself. It’s available now in the BiggBoss repo, in Cydia, for free.

Have you tried MissionBoard yet? What did you think of it?

Update: Shortly after this review posted, I noticed an update for MissionBoard in Cydia. It actually improves the speed of the tweak quite a bit, but it still stutters.