Gartner is out today with their second-quarter phone sales data and the results confirm what avid readers of this site have known all along, that a lot of people are holding off their planned purchases as the next iPhone looms. With less than four weeks left until the rumored September 12 unveiling, Gartner has registered a 2.3 percent decline in worldwide sales of mobile phones to end users.

Out of the 419 million cell phones that shipped during the quarter, more than one-third were smartphones, or 36.7 percent. While the whole cell market contracted a bit, smartphone sales grew 42.7 percent year-over-year.

The fight for smartphone supremacy continues to be a two-horse race between Google’s Android platform and Apple’s iOS, which together accounted for nearly 83 percent of the world’s market for smartphones. Other branded vendors all experienced a decline, with the notable exception of China’s ZTE and Huawei whose global growth continues unabated..

The research firm attributed the decline in global cell phone shipments to the iPhone 5 wait effect:

Analysts warned before that swirling rumors could hurt iPhone sales. Apple could see another quarter with growth stalling, Gartner warns:

Depending on the exact launch date of the new iPhone, Apple might experience another weaker-than-usual quarter in the third quarter of 2012, while Apple will be ready to take advantage of the strong holiday sales in North America and Western Europe that have historically remained immune to economic pressure.

All told, 98.6 million Android cell phones shipped in the second quarter of this year (smartphones and dumb phones combined) versus 28.9 million iPhones. Nearly all of the growth in the Android camp came from Samsung, whose mobile phone sales increased 29.5 percent on record sales of Galaxy smartphones. 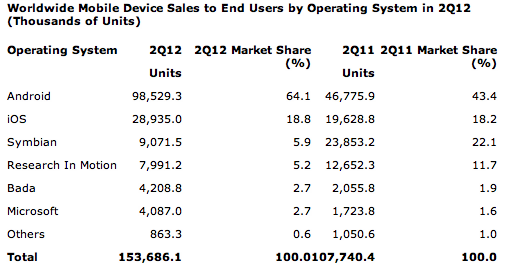 Interestingly, smartphones now account for 50.4 percent of all Samsung mobile devices, or 45.6 million units. The Galaxy S3 was the best-selling Android device in the quarter. Sales of that phone could have been even higher if it weren’t for shortages.

Another interesting observation to glean from the above table: Microsoft’s Windows Phone and Samsung’s Bada are neck-and-neck, with 2.7 platform share each. 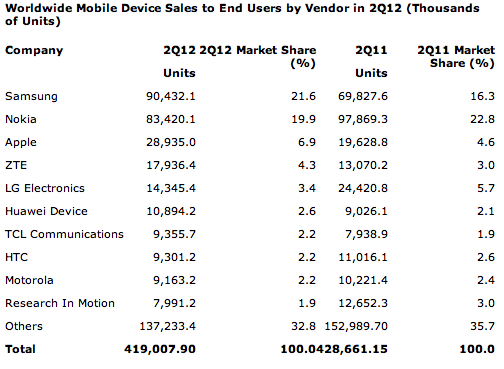 As you can see, of all branded vendors only Apple and Samsung grew as LG, HTC, Motorola and RIM saw their sales shrink substantially.

RIM said it is thinking about licensing its long-in-the-making BlackBerry 10 OS amid turmoil that could see the company sold in parts to Samsung, Microsoft or possibly other parties.

Also of note, ‘Others’ accounted for nearly one-third of the 419 million global cell phone shipments. I have a feeling some of those sales were Android cheapos in emerging markets, where people dump their dumb phones for low-end Android devices.

That, plus the iPhone’s exorbitant prices in some of the world’s biggest emerging markets.