Apple has been granted an important patent today, covering two missing features of its $99 Apple TV set-top box: the ability to pull premium programming via cable television networks and display it alongside show information overlaid in menus, plus the ability to record television shows, DVR style…

The invention envisions a complex user interface calling for a menu overlay rendered on top of the live video area, to display useful information related to the show at hand.

More exciting than that, the below patent illustration depicts an Apple TV working in conjunction with regular cable TV, in this case Fox channels. 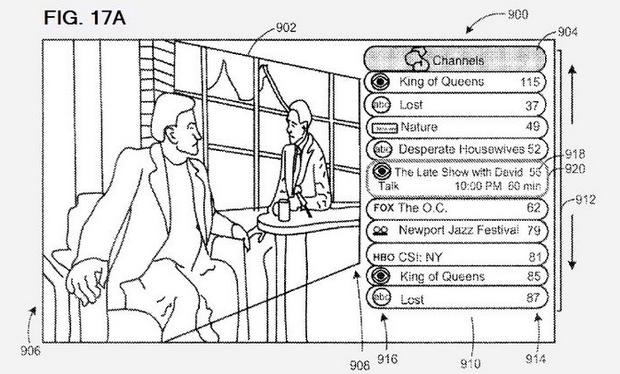 The patent was originally filed in the fourth quarter of 2006, a few months before the iPhone was publicly unveiled. Apple credits engineers Rainer Brodersen, Rachel Goldeen, Mihnea Pacurariu and Jeffery Ma as the inventors.

Check out a Record button in the patent drawing. 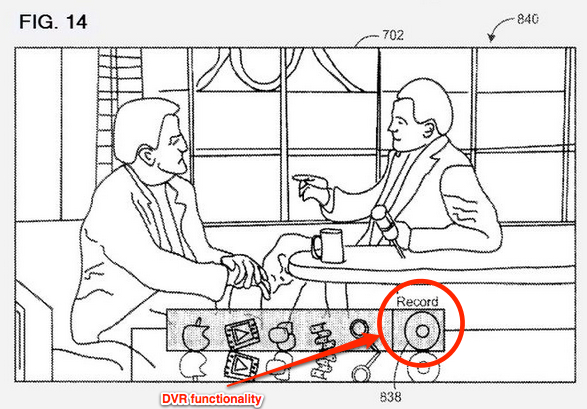 While the patent might indicate Apple’s plans for an advanced iOS-based Smart TV of sorts, a lot of these filings never see the light of day in an actual product.

Whether or not DVR and cable TV integration is meant for a standalone TV set from Apple or a future iteration of its Apple TV box remains to be seen.

Whichever way you look at it, the Apple TV has a nice set of features – except for the TV part. Most of the content comes either via its built-in support for video sharing services like YouTube and Vimeo, through Hulu integration and, of course, via Apple’s iTunes ecosystem.

The ability to watch cable television, pause and record shows and bring up an overlay with show information – these are all glaring omissions that Apple needs to address if it wants to mainstream its little hockey puck thing.

Which brings me to this: what are your favorite tweaks to enhance the experience on your jailbroken Apple TV?

Off topic: In case you were wondering, no one is working on a jailbreak for the third-generation 1080p Apple TV, except for FireCore (though they’ve been saying this for ages).