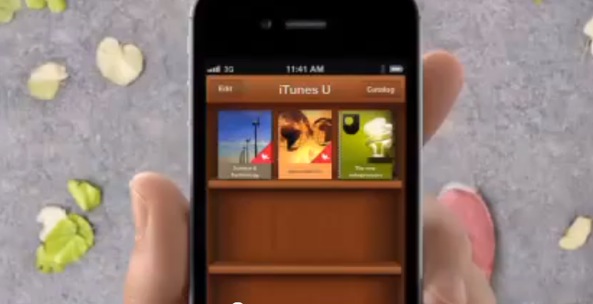 A new report points out that Apple’s been airing an interesting iPhone television commercial in some local markets, such as Canada and Germany, and it shows a shot of Jonah Lehrer’s “Imagine: How Creativity Works” front cover.

What’s interesting is that Lehrer last month admitted to making up the quotes attributed to Bob Dylan. Though the book sold more than 200,000 copies in digital and physical formats, sellers pulled it over the scandal, including Apple which no longer offers a dead tree version of “Imagine: How Creativity Works” on the iBookstore…

As pointed out on Twitter, the commercial was first seen a few weeks ago in Germany. Élyse Betters of 9to5Mac spotted it today, observing:

You can also watch the clip on Apple’s Canada website.

News of the fabricated quotes broke a week ago, when the book’s publisher, Houghton Mifflin Harcourt, provided a statement from Lehrer in which the author acknowledged to lying to journalist Michael Moynihan.

According to The Wall Street Journal, Lehrer’s statement reads:

Three weeks ago, I received an email from journalist Michael Moynihan asking about Bob Dylan quotes in my book ‘Imagine’. The quotes in question either did not exist, were unintentional misquotations, or represented improper combinations of previously existing quotes.

But I told Mr. Moynihan that they were from archival interview footage provided to me by Dylan’s representatives. This was a lie spoken in a moment of panic. When Mr. Moynihan followed up, I continued to lie, and say things I should not have said.

Barnes & Noble, Amazon and Houghton Mifflin Harcourt all promised to halt sales over the scandal.

“Imagine : How Creativity Works” also cannot be found on the iBookstore, though Apple continues to feature the book’s cover in iPhone advertising.

Funny how Apple’s legal team missed this one.

I’d bet my shirt that the company will pull the advert once its legal sharks find out about fabricated quotes via media reports, no?