When Samsung on Monday publicized previously excluded evidence related to its F700 phone and other devices it had been working on before the iPhone came along (to establish prior art), the company didn’t just anger Judge Lucy Koh, it also drew ire of Apple’s legal team.

Cupertino is now asking the court to rule in its favor because Samsung’s unusual move was in an attempt to prejudice the jury. Because of that, Apple’s attorneys are saying the court should rule that Samsung infringed Apple’s patents as a way of punishing the South Korean conglomerate for misconduct…

In a filing to the U.S. District Court for the Northern District of California late Wednesday evening, Apple said the court should sanction Samsung by ruling that the patents at issue in the case are valid and infringed by Samsung.

And what happens if the court ignores Apple’s request?

And if the court declines to do so, it should at the very least instruct the jury that Samsung has engaged in “serious misconduct” and bar the company from any further mention of its Sony-style argument in court.

Reacting to Apple’s filing, a Samsung spokesperson issued this response:

Apple’s filing is baseless and we will be filing a response.

As you know, Samsung publicized slides depicting the F700 and various other phone designs it was working on before the iPhone, plus a deposition by a former Sony designer Apple hired to do a Sony-inspired iPhone prototype. 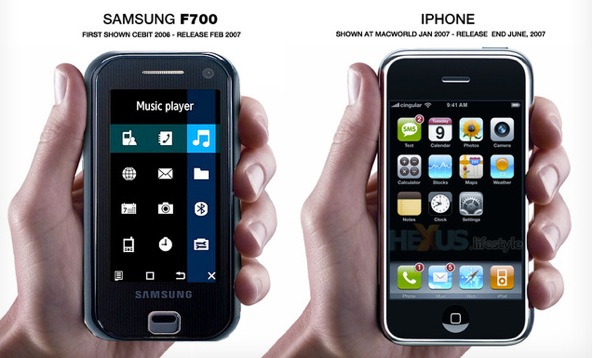 Samsung in a brief explained it made the excluded evidence public in response to media inquiries and because Apple was allowed to wrongly assert that the F700 is an iPhone copy. As for the iPhone vs. F700 copycat accusations, our poll indicates that iDB readers are divided and unsure about this matter as well.

Apple also warned that Samsung has a history of destroying evidence and pointed out that “litigation misconduct is a part of Samsung’s strategy” because “with so much at stake, Samsung has taken the calculated risk that any sanctions arising from its attempt to influence the jury with its excluded arguments are a price it is willing to pay”.

This trial is turning into a soap opera.

Do you think the court should sanction Samsung for publicizing excluded evidence?