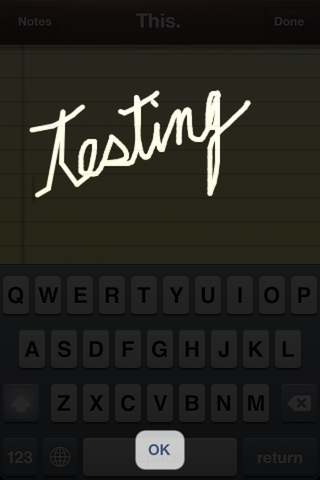 Handwriting recognition is a new $0.99 jailbreak tweak that recognizes hand written text, and converts that text into typed characters.

The cool thing about this tweak is that it uses Action Menu to activate itself, meaning it can be used freely in any app.

It’s an excellent idea, but it’s not without some major issues holding it back from its potential…

To enable Handwriting recognition, all you need to do is to invoke iOS’ copy and paste menu. Since this tweak ties in directly with Ryan Petrich’s Action Menu, you can use it from virtually anywhere.

Once started, the screen will dim, indicating that it’s safe to begin writing. I used Handwriting recognition on my iPhone with an accompanying stylus in the video, but after running into troubles, I decided it should also be tested on my iPad.

The iPhone’s screen just isn’t big enough to use Handwriting recognition effectively. The way it handles overlapping text negates any usefulness that may have been derived from the tweak. The main issue stems from the fact that anytime you overlap text, it creates new words based off the jumbled text blob, instead of forwardly progressing. This makes it impossible to write out anything more than a couple of words on the iPhone.

On the iPad, it works a tad better due to the extra space, but the fact still stands that it jumbles overlapped text. Beside the text issue, I found that the tweak contains its far share of bugs as well. Often I would be in the middle of composing a word or two, when it would stop, and go back to the app in question, forgetting that I ever wrote anything.

Make no mistake, Handwriting recognition has loads of promise. It’s an excellent idea that should most definitely be built upon. In the end, it’s probably best suited for the larger screened iPad, but it could work adequately on both devices with a little bit of TLC and debugging.

If you want to try it out for yourself, then head over to Cydia’s ModMyi repo where it can be had for $0.99.