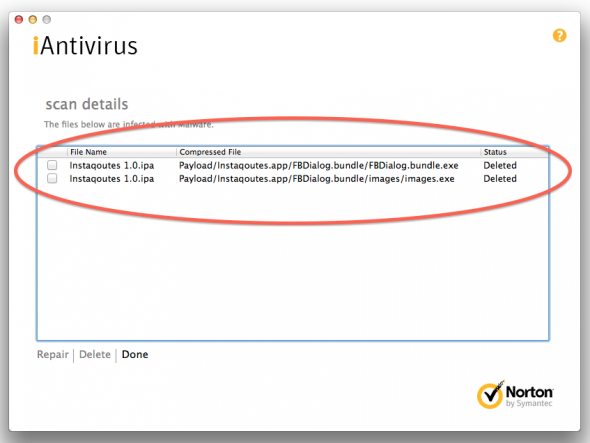 It looks like Apple’s App Store troubles aren’t over with quite yet. A new report is out this afternoon claiming that Windows malware has been discovered in an Apple-approved iOS app.

Instaquotes Quotes-Cards for Instagram, a third-party title that crawls the popular photo sharing service in search of Image Quotes, is said to contain an old made-for-Windows worm…

“In a recent post to an Apple discussion forum, user “deesto” mentioned he had downloaded the free “Instaquotes Quotes Cards for Instagram” app from the iTunes store and noticed that his ClamXav antivirus program had flagged the downloaded file as containing the “Worm.VP-900″ malware…

…To test the claims in the discussion forum, I download the Instaquotes package from the iTunes store and, scanning it with Symantec’s free iAntivirus program, found that it contains the following two Windows executables that are flagged as being malware.

It’s believed that the developer’s computer was infected with the malware, and it slipped into his app without his knowledge before he uploaded it.

The worm is old, created back in 2009, and is detectable by most Windows antimalware utilities. It doesn’t pose a threat to iOS or the Mac platform, but all things considered, it’s probably a good idea to avoid this app until the bug is eradicated.

This is the second malware-ridden app that has made its way into the App Store in as many months.