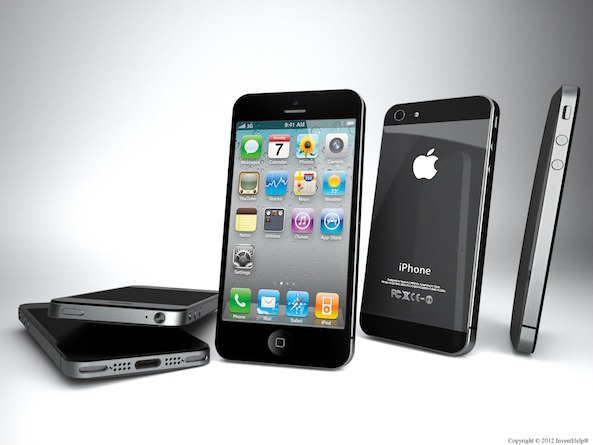 As the next iPhone looms with a rumored (read: likely inaccurate) September 21 release date, a new ChangeWave survey reveals that interest in buying the device is off the charts as demand “easily dwarfs the advance demand of any previous iPhone”. Perhaps analyst Gene Munster was right to call the iPhone 5 “the mother of all upgrades”.

The stats for planned smartphone purchases also show a much higher pre-release iPhone 5 demand compared to the nine-month-old iPhone 4S. Data confirms what we’ve suspected all along, that people want Apple’s next iPhone badly.

Let’s not forget the iPhone 5 will be the first iPhone model to be released following Steve Jobs’ passing on October 5 of last year, so it’s understandable that people attach emotional value to what will probably go down in Apple’s history as the last iPhone model developed with Steve’s input…

Research firm ChangeWave, a division of 451 Research, polled 4,042 consumers between June 18-25. Respondents were asked to express their likeliness to purchase a Galaxy S III from Samsung versus an upcoming sixth-generation iPhone.

According to a blog post, Samsung and Apple continue to dominate planned smartphone purchases.

Specifically, with 14 percent Very Likely and 17 percent Somewhat Likely to purchase the next iPhone when it becomes available, the device already commands higher demand than the iPhone 4S did when ChangeWave conducted a similar survey in October 2011. Back then, 10 percent were Very Likely and 11.5 percent were Somewhat Likely to get an iPhone 4S.

ChangeWave summed it up nicely:

The biggest finding of the survey is the unprecedented level of advanced demand for the next generation Apple iPhone (i.e., the ‘iPhone 5’) — which based on these survey numbers easily dwarfs the advance demand of any previous iPhone launch.

Another quote, via Fortune:

The huge wave of pent-up demand for the coming iPhone launch has important implications for the rest of the industry – and puts a number of second tier smart phone manufacturers at increased risk of coming in below plan for the year.

In contrast to Apple and Samsung, demand for Motorola (4%; down 2-pts) and HTC (3%; unchanged) remains sluggish, while RIM (2%; unchanged) is stuck at its all-time low.

In a positive finding for Nokia (2%), it’s seeing a slight uptick in consumer smart phone buying. While it’s only a 1-pt increase over March, it remains a hopeful sign for their new Lumia device as well as their strategic partnership with Microsoft.

Samsung with its Galaxy S III is second only to Apple, with two percent Very Likely and seven percent Somewhat Likely to get one. These numbers represent a six percentage points increase since March and are four times higher for planned Samsung smartphone purchases over the past three quarters. 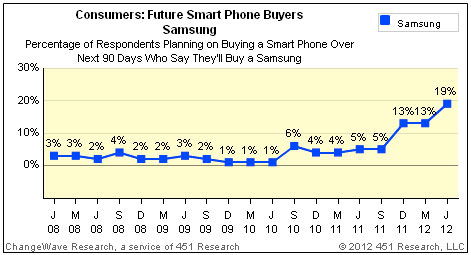 Samsung just announced that it sold ten million Galaxy S III shipments in 55 days since its release. The handset saw more than nine million pre-orders from a hundred carriers, making it the fastest-selling gadget in history.

The iPhone 4S, which sold four million units (pre-orders included) during its launch weekend is considered the most successful smartphone release in Apple’s history. 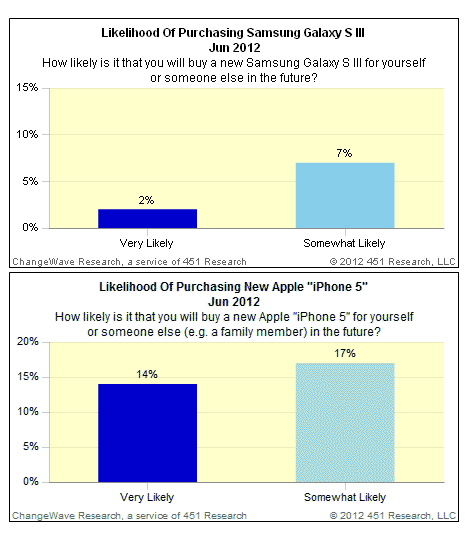 Of course, sample size leaves a lot to be desired and the fact that 88 percent of respondents were from the United States may have further skewed the results. Nonetheless, the numbers do indicate buying patterns and trends and as such are indicative of the smartphone market.

Are you planning on buying the next iPhone, the S III be damned?