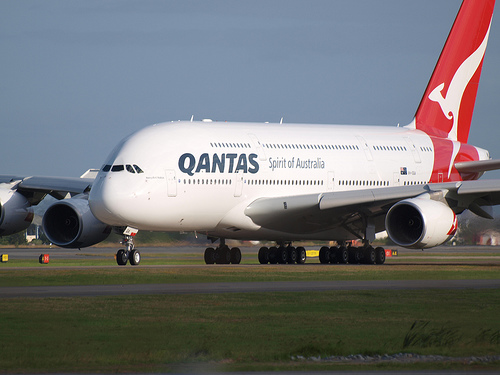 This is pretty interesting: Qantas, an Australian airline, is now handing out iPads to passengers on all of its B767 airliners. The tablet is being used to provide an in-flight entertainment service, called QStreaming, which features more than 200 hours of on-demand content.

QStreaming is free, and offered to all Qantas Business and Economy class customers. Here’s a brief overview of the new service:

Perhaps even more interesting is what all of this means for Apple. Now that the QStreaming project is rolling out, Qantas is expected to purchase more than 5,000 iPads to cover its fleet of jets. Add that to the 2,200 iPads it’s already purchasing for its pilots and flight crews, and that’s 7000+ tablet sales for Apple from a single customer.

In a related note, Qantas is also in the process of dropping all of its BlackBerry handsets in favor of the iPhone. The airline’s CIO Paul Jones says that the iPhone offers a “user-friendly interface and simple access to emails, contacts and calendars, as well as meeting all Qantas’ security requirements.”

But back to QStreaming. The service seems like it’s going to be a hit with passengers, who not only will be able to leave their slates at home, or packed, but will also get to enjoy 200 hours of free movies and TV shows. We wouldn’t be surprised if other airlines followed suit here.

What do you think? Good idea/bad idea?