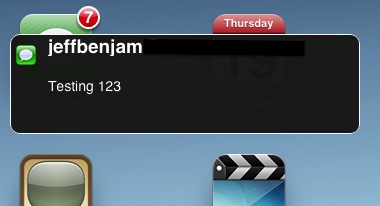 Yesterday we brought you a preview of NotiPad, an upcoming jailbreak tweak that enables Growl inspired notifications on the iPad. Although NotiPad looks promising, it wasn’t without a few quirks in my testing, and it will also cost $1.00.

Another developer, undoubtedly inspired by what he saw, has created a new tweak that mimics many of the functions present in NotiPad, and he will be releasing his tweak for free. He’s calling his tweak Banners+, and we’ve taken it for a spin on video…

Banners+ features nearly all of the options present in NotiPad outside of the animation toggles. In fact, I found Banners+ to perform a bit better than its counterpart, though it must be noted that until they hit Cydia, both tweaks are still in development.

Honestly, I think we have a bit of “developer beef” going on, as I spied yesterday on Twitter both developers going at each other. I’m not sure what it stems from, but I think it has something to do with the developer of NotiPad deciding to charge for his tweak.

I have nothing bad to say against someone trying to make money off of their work, but it’s up to us — the public — to respond with our purchasing power. If a tweak is good and worth the money, then by all means break bread. But if it’s not, keep the wallets closed.

Which tweak do you prefer? Banners+ or NotiPad?