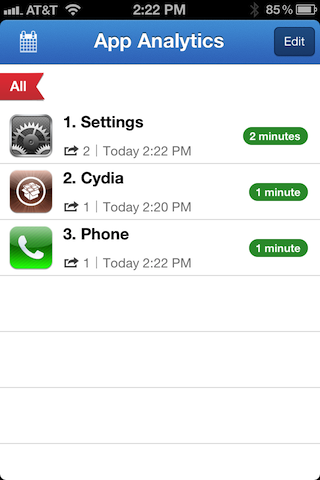 But when a jailbreak app appears on the scene that looks like it was designed to move units on the App Store, you can’t help but take note. AppAnalytics — an app usage app for jailbroken devices — is a great example of this. It’s a beautiful looking jailbreak app, and it too gets the job done…

AppAnalytics is very simple in the way it works. It monitors how long you’ve used each app on your iDevice, it logs how many times you’ve used it, and it reports on the last time you actually launched the app.

Another nice thing about this app is that it automatically creates reports that help you identify your monthly app usage. You also have the ability to launch each app directly from AppAnalytics.

And that’s all there really is to AppAnalytics; it’s not a very deep app at all. What you see is what you get here, and while it’s a beautiful app in form, it’s a tad shallow in function. Still, for $0.99 on the BigBoss repo, it might be worth taking a look at. I recommend taking AppStat — an app that does similar things free of charge — for a spin first. If that doesn’t fit your needs, then you can try this.