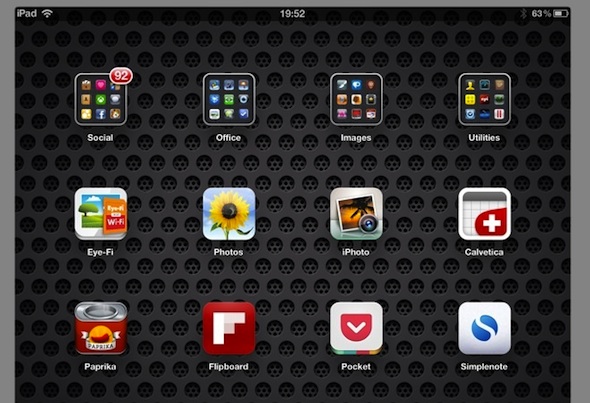 After a series of reports from Bloomberg and The Wall Street Journal, the “iPad Mini” has once again become the hotest topic in the tech world. It seems like everyone is getting in on the speculation regarding how, when, and why Apple would release such a device.

Up to this point, one of the most popular arguments against the smaller iPad has been that a 7.85-inch display would render most current apps unusable. So either developers would have to completely redesign their apps, or users would be forced to deal with tiny UI elements.

This theory has already been disproven by a number of pundits, via math and other reasoning. But we’ve come across some mockups that really drive the point across, demonstrating what apps would look and feel like on the smaller screen…

TUAW’S Richard Gaywood took it upon himself to shrink down iPad screenshots of Springboard, Safari, and other applications, to emulate what apps would look like on the rumored tablet.

To see Gaywood’s experiment in action, simply visit this website on any current 9.7-inch iPad. All of the images show up in 7.85-inch form, giving you a fairly good idea of the display size.

As you’d expect, touch targets seem like they’d be more difficult to hit than they are on the iPad, but also easier than on the iPhone. The bottom line here is that apps, without much additional work from developers, would be perfectly usable at this size — though it’d take some getting used to.

Whether Apple is going to actually release a smaller iPad still remains to be seen. That all depends on if it believes there is demand for such a device, and a potential for profit. But between this evidence, and all of the ongoing reports, it’s starting to seem more and more like a possibility. Where there’s smoke, there’s usually a fire. Right?

For those of you who viewed the mockups on your iPad, what’d you think? Usable/unusable?