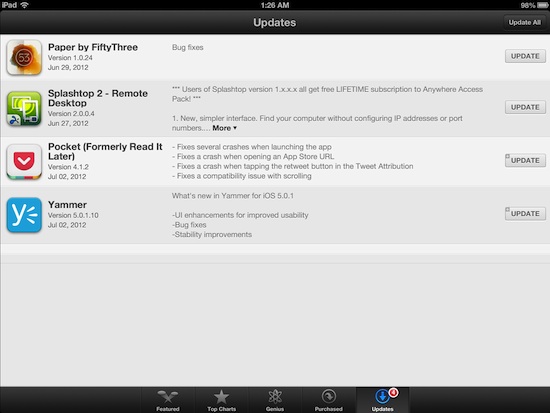 Over the last 48 hours, the App Store has been suffering from a glitch that has been causing some newly-updated apps to crash upon opening. The bug has been a nightmare for developers, who have been taking a lot of heat over the issue.

Yesterday, Apple acknowledged the problem, and confirmed that it had a dedicated team working to resolve it. And it didn’t take long, last night the company started sending out official statements that the updating glitch has been repaired…

“We had a temporary issue that began yesterday with a server that generated DRM code for some apps being downloaded, it affected a small number of users. The issue has been rectified and we don’t expect it to occur again.”

Marco Arment, who kickstarted this whole story after receiving a number of complaints from Instapaper users, says Apple is way off on its description of “small number of users.”

“Based on my cumulative stats for July 3, Instapaper’s corruption alone probably affected well over 20,000 customers, and there were over 120 other apps affected, including some very big names such as Angry Birds, GoodReader, Yahoo, and the LA Times.”

But despite the fact that it seems to be downplaying the issue, we have to admit that Apple actually handled this very well. It acknowledged the problem early, fixed it swiftly, and Macworld is even reporting that it plans on removing all of the one-star app reviews that developers received due to the glitch. Cool.

If for some reason you are still experiencing problems with an app, Apple says you should delete it, and then re-download it from the App Store. Easy enough.