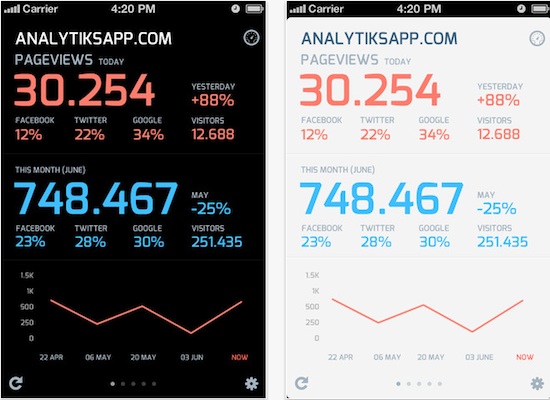 If you own or operate a website, chances are you have, or have had, a Google Analytics account. The service allows you to monitor your site’s traffic, and gives you all kinds of data regarding your readership.

For those of you who fall in that category, and are in the market for a new Analytics client, you might want to check out Analytiks. The popular app just received a major makeover to bring it to version 2.0…

Analytiks’ strong suit has always been its ability to display hordes of confusing traffic data in an easy-to-read format. And version 2.0 builds on that strength with a completely redesigned UI, which looks great.

But the app’s new user interface doesn’t just look pretty, it’s also a lot faster too. In fact, Blatt Labs says its the fastest UI they’ve ever created. You can navigate the entire app with just a few swipes and taps.

And for those of you who aren’t interested in bouncing around the app, version 2.0 also has a new home page graph, which allows you to see page view count and other useful information at a quick glance.

Whether you’re a novice blogger, or a seasoned web master, Analytiks is definitely worth taking a look at. It’s  so much better than the average Google Analytics app, and it’s a steal at $0.99.

What do you think of Analytiks? What’s your favorite Google Analytics app?