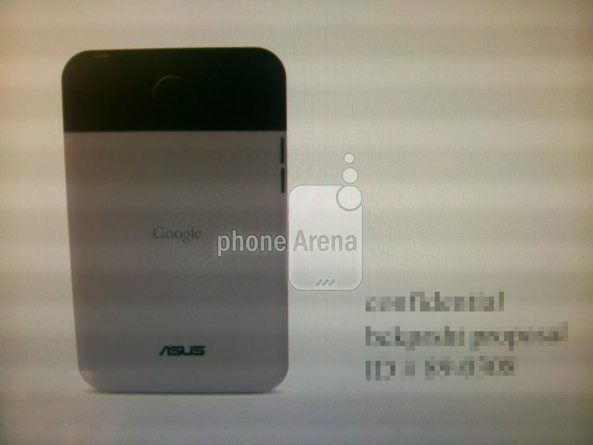 Piggy-backing on Google chairman Eric Schmidt’s last December revelation that his company was working on own tablet, an Asian trade publication claims an Asus-engineered device marketed under the Nexus moniker launches at the Google I/O developers conference, which runs from June 27 through 29 in San Francisco’s Moscone West.

It’s gonna cost just $199 and feature a seven-inch display, the word on the street has it. The publication also offers tidbits regarding launch plans for Google’s first branded tablet…

The above blurry shot is said to represent a seven-inch Google-branded tablet, courtesy of PhoneArena.

The hit-and-miss DigiTimes has the story:

Due to its low price, the 7-inch Nexus tablet PC only supports a Wi-Fi connection and does not feature a back-side webcam, but will equip with a front-side webcam for video conference.

The device will also be preloaded with Google’s Chrome browser, with compatibility issues having been resolved to allow smoother operation for some software applications.

Surprisingly, source claim that the Nexust tablet already started shipping in June, which would explain leaked photographs cropping up all over the Internet. It should be available in July and total shipments are said to reach “at least three million units in the second half of the year”.

With Microsoft having just unveiled its own branded tablet (with no word on pricing or availability, mind you), I think it’s fairly safe to assume that Google wouldn’t want to be left behind.

Both firms, however, are likely to antagonize their hardware partners by entering the tablet race. Conceivably, some Android backers are already beginning to separate themselves from the pack due to Google’s control of handset maker Motorola Mobility, including Samsung.

On the other hand, a Google-branded tablet paves the way for more ICS and Jelly Bean slates, potentially expanding the market for Android app developers as a result – something Eric Schmidt has been dreaming about for a long time now.

Be that as it may, the tablet space is bound to get lots more interesting this year.