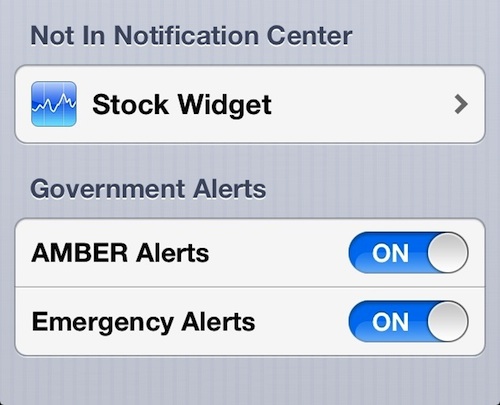 Still looking for new iOS 6 features? Then you’re in luck, because we’ve just come across one that you might not have seen yet: Government Alerts.

That’s right, it looks like the latest iteration of Apple’s mobile OS includes built-in support for AMBER alerts, and other emergency notifications…

For those of you who aren’t familiar with AMBER alerts, they are sent out to the public on the suspicion of a child abduction. Then there’s general emergency alerts, which are typically issued during severe weather or other life-endangering events.

From the looks of the above screenshot, users will have the option to receive these alerts natively via push notifications in iOS 6 — something that could come in handy for folks who aren’t constantly around local news sources.

It’s not known, however, how Apple will go about implementing this feature in the public release of iOS 6. It doesn’t appear to be available on all devices in the beta (we’re not seeing it on ours, anyways), and obviously government alerts are going to be country-specific.

Regardless, this is definitely a step in the right direction. These push notifications have the potential to prevent injuries — say in the event a hurricane or tornado is approaching — or even save lives. It’ll be interesting to see how this plays out.