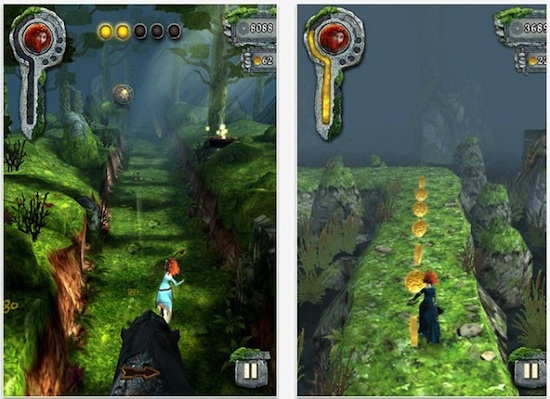 No matter how long you’ve been an iOS user, chances are you’ve come across Temple Run at one point or another. The game, known for its addictive gameplay, is currently ranked #47 on the App Store’s list of top grossing apps.

Well, it seems like Disney is looking to cash in on that popularity. Temple Run: Brave was released in the App Store last night. And as the name suggests, it’s a remake of the popular title using content from Pixar’s new film…

Now, don’t mistake this for another knockoff. Temple Run: Brave is a collaborative effort between Disney and original Temple Run creator Imangi. So all of the original fast-paced fun is there — plus a few extras:

The title looks promising, even if you have no desire to see the film. After all, the original Temple Run hasn’t seen any major revisions since it debuted last fall. So if you’ve played it as much as we have, it’s likely lost some luster.

The bad news is, unlike the original version, Temple Run: Brave is going to run you $0.99. There’s no free version. But the good news is it’s universal (iPhone and iPad).

At any rate, if you’re interested, you can find Temple Run: Brave in the App Store.

Have you tried Temple Run: Brave yet? Thoughts?