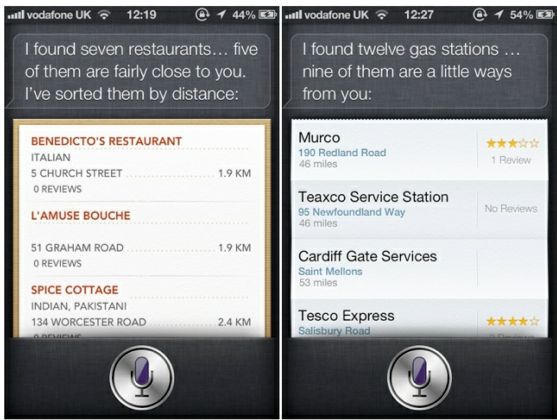 Although this has been announced in the WWDC keynote, we are beginning to receive reports that Siri in iOS 6 Beta is now able to find places internationally, at least in certain countries and with limited precision. By the way, jailbreakers can get this functionality by way of an AssistantExtensions plugin called International Locations…

According to Reddit, a user in Australia was able to find a restaurant using Siri:

A whole one restaurant is registered with whatever service they use (yelp?) I asked Siri to find me the closest restaurant and it was 26 kilometres away. Yay.

And Killian Bell over at Cult of Mac searched for a pizza place in the United Kingdom:

One thing I have found, however, is that it doesn’t seem to be quite as accurate in the U.K. For example, when I asked Siri “where can I get pizza,” its closest result was around 15 miles away.

However, I know there’s a pizza shop at the end of my road. When I asked for the nearest gas station, the closest result was 46 miles away.

It looks like Apple has just begun enabling international location searches for Siri in iOS 6 Beta, which would explain inaccuracies and a very limited location data.

Siri will come to the new iPad when iOS 6 launches this fall.

iOS 6 also integrates Siri with the new Maps app and introduces a host of advancements such as the ability to launch apps, updates social statuses on Twitter and Facebook, make restaurant reservations, search for movies and check out sports scores, player stats and more.

For a more detailed overview of what’s new in Siri, check out Jeff’s great video overview.

I’m based out in Europe and have been longing for this.

If you live abroad, we’d love to hear about your experiences with location search in Siri.