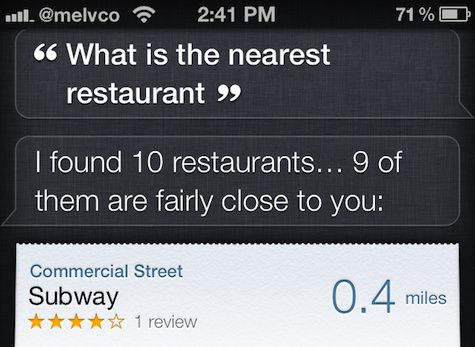 While iPhone 4S owners in the U.S. enjoy a host of location-based Siri functions, folks outside the country are out of luck. Try going to the UK and asking Siri where the nearest McDonalds is, and you’re sure to get shot down.

But as usual, the jailbreak community has figured out a way to make up for Apple’s shortcomings. A new AssistantExtensions plugin, International Locations for Siri, allows you to perform location-based searches abroad…

That’s right, as long as you have a jailbroken, Siri-enabled device, you can use International Locations to start finding local businesses near you. Ask Siri about restaurants, hospitals, and other points of interests, and she’ll respond!

If you don’t already have AssistantExtensions, Cydia will download it for you along with the International Locations package. Once both are finished, you simply activate the plugin from the Settings menu and you’re all set.

The developer, Zaid Elkurdi, says that the tweak works in more than 100 countries, including the UK, France and Germany. We don’t currently have any way to test it outside of the U.S., but we’re assuming it works as advertised.

If you’re interested in trying out International Locations for Siri, you can find it in Cydia, in the BigBoss repo, for just $0.99.

Have you tried out this plugin yet?