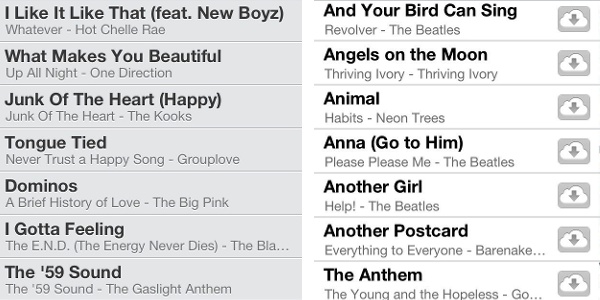 One of the markedly little improvements in iOS 6 that many people originally missed is the ability to stream songs stored in your music locker in the cloud. When Apple introduced iTunes Match last August, much of the debate centered around the question whether or not it streams songs.

Though it appeared as if it did, Apple denied iTunes Match streaming. Semantics aside, iTunes Match in iOS 5 used to exclusively download and store songs on your device. With iOS 6, you can now choose to either stream a song as many times as you’d like or download it for offline listening…

As noted by Apple’N’Apps, tapping a song in the Music app now defaults to streaming. To be perfectly clear here, streamed songs do get cached so you can listen to them later without a network connection.

However, any song you streamed gets wiped out from the cache when iTunes Match is turned off. Of course, you can still download songs to your device permanently by specifically taping on the iCloud icon.

iTunes Match has become a streaming service in the beta. We confirmed it, by playing a few songs, then turning off iTunes Match, and seeing that the music folder then had no music.

In iOS 5, the few tracks you listened to are stored. The various playlists, artists, and songs also drop the cloud icon next to them, and those are reserved for the album view, and a little bit off to the side.

Contrast this to iOS 5 which exclusively downloads songs. As a result of this behavior, any songs you’ve already downloaded to your device from iCloud stay there even after you disable iTunes Match. Plus, they’ll still be there when you re-enable it, too.

This behavior is also true in iOS 6, but only if you specifically tapped the iCloud icon next to the album name. As mentioned before, tapping a song name now defaults to streaming and streamed songs get wiped out after you disable iTunes Match and are no longer available when you re-enable it.

iOS 6 has also brought a change to the stock Music app which now resembles its iPad counterpart while adopting a silver-themed appearance. You can also set any song from your music library as your alarm.

Apple also yesterday approved Amazon’s cloud-based music app which enables you to either stream or download songs in your cloud music locker.

And this just in, CNET reports that Amazon will announce cloud-music rights that will match Apple’s iCloud within weeks.

Could this slight tweak mean that Apple is readying a subscription-based streaming music service?