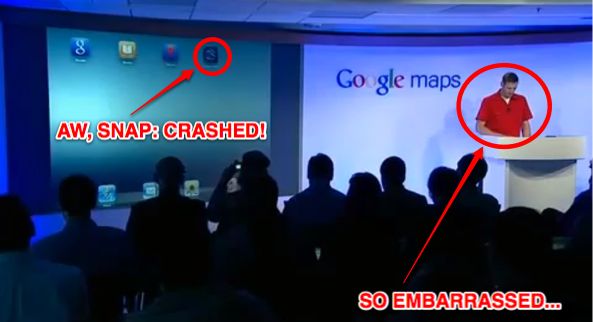 Our friend and former iDB writer Alex Heath points us to a short clip highlighting Google’s embarrassment at yesterday’s hastily organized press conference to announce “the next dimension in Maps”. Instead, as pointed out by MG Siegler, the search Goliath revealed anxiety over Apple Maps.

Be that as it may, the fact remains that Google put up a pretty boring show, rushing out a new version of Google Maps and looking foolish in the process…

Though Google showcased the upcoming version of the mobile Google Earth app on both Apple’s tablet and an Android slate, it crashed on the iPad – and more than once, too.

Other than the app crashing thing – which, by the way, Jobs experienced during his keynotes, too – yesterday’s event has brought out Google’s 3D mapping technology which admittedly looks pretty doggone good. Check out all the details in our liveblog article.

Why didn’t he just bring up the app switcher and kill the program prior to launching it the second time?

Should you choose to speak out, we’re down in the comments.