Whoa, looks like another iOS app developer (not exclusive, though) just ended up engulfed in the Google ecosystem as the search giant announced its acquisition of the popular mobile app productivity maker Quickoffice for an undisclosed sum.

The search Goliath confirmed the acquisition in a post by engineering director Alan Warren over at the official Google blog:

We’re happy to announce that we have acquired Quickoffice, a leader in office productivity solutions.

Google underscored its intention to keep on supporting “a strong base” of Quickoffice users, reassuring users it will be working on “an even more seamless, intuitive and integrated experience”. The company also acknowledged intentions to bring Quickoffice’s “powerful technology to our Apps product suite”.

Quickoffice CEO and co-founder Alan Masarek, of course, is full of praise for the combination of “the magic of Google’s intuitive solutions with Quickoffice’s powerful products”.

Quickoffice, which lets users create and edit Microsoft Word, Excel and PowerPoint documents on their mobile devices, has been a hit across mobile platforms.

Their mobile app is currently installed on over 300 million devices in more than 180 countries. I reviewed their excellent iOS suite over at Geek.com in October of 2009, shortly following the software’s debut on the App Store. 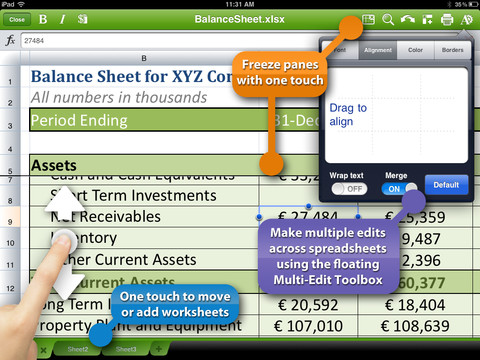 A few updates later, Quickoffice is still my go-to Office replacement on both iOS devices and Android smartphones and tablets.

While there are plenty of Office alternatives on the App Store, hopefully this acquisition won’t slow down the pace of development in respect to the iOS platform.

Is this another case of Google snapping up a successful iOS software developer in order to make its Android platform more appealing?

If you’re getting worked up over this, why not take our poll?