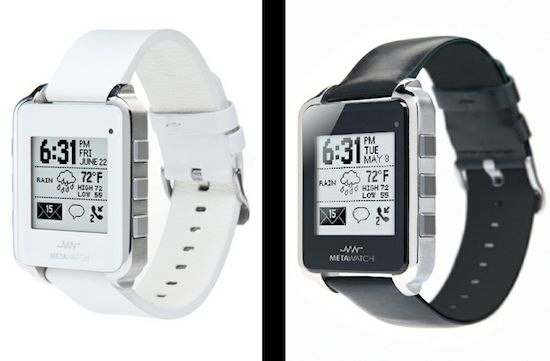 Last month, a Kickstarter project by the name of “Pebble” took the iOS community by storm. The iPhone-compatible wristwatch broke practically every Kickstarter record in existence, nabbing $10 million in pledges from 70k backers.

Capitalizing on this newfound demand for iPhone-connected smart watches, Meta Watch has just released an update to its Android companion. The new version includes support for the iPhone 4S and the iPad 3, along with Bluetooth 4.0…

The Meta Watch utilizes a mirror polymer network LCD, which is apparently fully reflective in direct sunlight. It also features 6 programmable buttons, a 3-axis accelerometer, an ambient light sensor and now, Bluetooth 4.0. This is a fairly big deal, as the Bluetooth 4.0 profile uses far less power than previous versions.

So is this smart watch better than the Pebble? That depends on what you’re looking for. On the plus side, the Meta Watch is available now, where as the Pebble won’t hit retail stores until the fall. But at $199, it’s more expensive.

It’s also hard to tell what the Meta Watch is capable of at this point. While the current model can pull notifications for text messages, email and phone calls from Android devices, there’s a good chance that these capabilities won’t transfer to the iPhone right away.

Nevertheless, the Meta Watch is certainly worth keeping an eye on, as is the entire “smart watch” market. Folks certainly seem to be looking for a way to control their smartphones from their wrists — it’s just a matter of which company can do it right for the right price.

What do you think of this smart watch craze? How long before Apple gets involved?