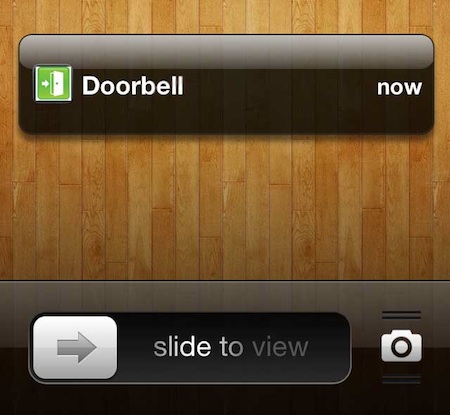 As iDB is deeply involved in the jailbreak community, we see cool software and hardware hacks all the time. One of my favorites is by Mark Hodder, the freelance webmaster, who programmed Siri to turn his fireplace off and on.

Today, we’ve got another cool hack to share with you. This one comes from Clement Storck, over at Make Projects, who hacked his doorbell to send his iPhone push notifications (and doorway photos) when activated by a visitor…

Using an Arduino board (a microcontroller) and PushingBox software, Storck set up an iPhone push notification for his doorbell. When a visitor rings the bell, the Arduino sends an HTTP request to PushingBox, which then sends out the alert.

But that’s not all Storck’s setup does. It also uses a web camera, situated above the door, to snap a photo of the visitor. So at the same time PushingBox is sending a doorbell notification to his handset, it’s also emailing him a real-time photo.

If you find the project interesting, Storck gives a full tutorial on how to put it together over at Make Projects. I’d like to see the hack launch a live video feed of the front door, and possibly a two-way intercom, but this is still pretty cool.