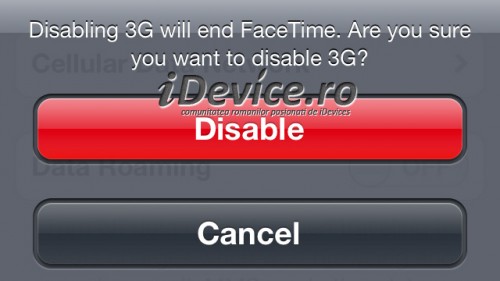 While folks in the jailbreak community have been able to make FaceTime calls on cellular networks for quite some time now, others haven’t been so lucky. Since it debuted in 2010, the video calling feature has remained Wi-Fi-only.

Today, however, evidence has surfaced that suggests Apple is testing a FaceTime over 3G option. The folks over at iDevice posted the above screenshot, which was taken from an error message pulled out of iOS 5.1.1…

As most of you probably know, this isn’t the first time we’ve seen such evidence. Last summer, a similar feature was discovered buried deep down in beta versions of iOS 5. And we found similar strings ourselves in iOS 5.1.

Maybe the feature has always been there. It’s just never been activated.

Apple would certainly need to get the carriers’ approval before deploying such a feature. Not only would FaceTime use a large amount of wireless data — which is becoming more expensive, but it would cannibalize profitable voice calls.

Perhaps with the next iPhone expected to run on 4G LTE networks, we could finally see FaceTime set free this fall. But we aren’t counting on it. Carriers seem to be having a hard enough time as it is just trying to deal with iMessage.