With one in two in the United States now owning a smartphone (was 40 percent of mobile subscribers in 2011), app downloads are on the rise, too.

Compared to last year, the average smartphone consumer in the U.S. now has 41 apps on their home screen, a 28 percent increase from 32 apps in last year, according to a Nielsen study released this morning.

Nielsen’s Appnation study found out that the rise of Android and iOS users, who have more than doubled in a year, has had profound effects on the app economy with both platforms now accounting for 88 percent of those who have downloaded an app in the past 30 days. 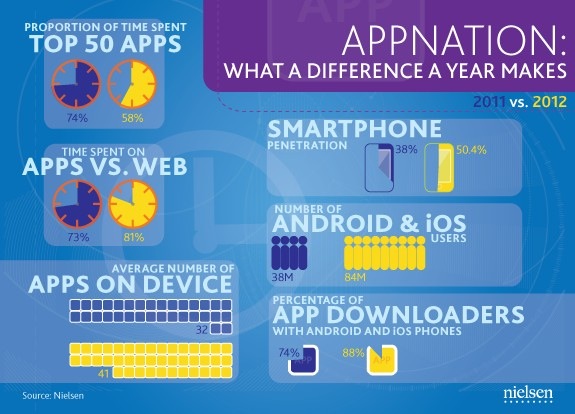 Here, the top five app downloads in the United States:

The official Facebook app remains the most-downloaded free item on the App Store, no surprises here.

As some people pointed out, the program is actually rubbish and you could be better served by simply using a Facebook bookmark in Safari instead.

What is surprising is the fact that four of the five most-downloaded apps in both 2011 and 2012 are by Google.

Despite the growing number of smartphone owners, a typical user still spends approximately the same amount of time on apps each day: 37 minutes a day in 2011 compared to 39 minutes today.

Nearly three-quarters of smartphone owners in the United States have privacy concerns with apps and more than half are wary about location sharing in apps.