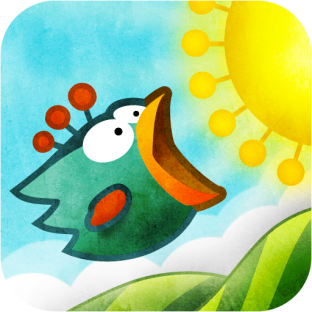 We instantly fell in love with Tiny Wings by Andreas Illiger, an addictive game featuring a cute bird flying through a series of random hills. The game still files as one of the best entertainment releases to hit the App Store since Angry Birds.

Apple loves it, too, and it even inspired a charming knock-off dubbed Whale Trail. Having earned a fortune from Tiny Wings, the developer shared a little secret on his upcoming project, scheduled to hit the App Store by June.

In a rare interview with Flow Studio, Illiger announced a new iOS game “in less than three weeks”, following more than ten months of development. He wouldn’t reveal any detail beyond saying it’s “a big secret”.

If Tiny Wings is an indication, we’re in for another round of highly addictive gameplay. He was a little “shocked” with the success of Tiny Wings and said the money didn’t spoil him.

Suddenly the whole world went to my room and everybody wanted something: to buy me, to buy the license, sell merchandising stuff, make cinema movie. It was totally crazy.

I am still the guy I was before Tiny Wings and I just want to make cool games, that’s my passion

In fact, Illiger only purchased a new computer. He did not hire a bunch of people nor did he set aside a big marketing budget to push his future projects.

As for the Tiny Wings concept, Illiger remarked:

There are many destructive and negative games so I wanted to figure out if it is possible to make a game which makes you feel happy.

Are you looking forward to his new game?

If it’s anything along the make-you-feel-happy lines, I’m sold.