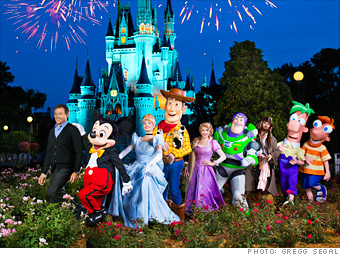 Disney CEO Bob Iger, who got named to Apple’s board last year, shares some interesting tidbits with Fortune concerning life at Disney and his management style.

He apparently runs the Mickey Mouse house a lot like late Apple CEO Steve Jobs had used to lead the consumer electronics powerhouse he co-founded.

Iger also let us in on how he’d persuaded Disney’s board of directors to greenlight a risky acquisition of Jobs-owned animation studio Pixar, even though the board was unsure whether Pixar was for sale at the time…

In a story from the May 21, 2012 issue of the Fortune magazine, published under the headline Big Iger: Disney’s Fun King, senior editor Jennifer Reingold digs for clues about Iger, the way he runs Disney and some obvious references to Steve Jobs.

Comparing his management style to that of late Apple co-founder Steve Jobs, Iger told the author:

“In a strange way,” Iger says, “I am the brand manager of Disney.” He sees his job as building, in the words of his friend the late Steve Jobs, more “brand deposits” than “brand withdrawals.”

The CEO is referring to 2008, when he sought advice from Jobs concerning a revamp of Disney’s retail stores. A 2011 report by the Los Angeles Times newspaper explained how Jobs told Iger to think in terms of “brand deposits” or “brand withdrawals” every time they made a movie, television show or consumer product.

You could make the argument that Disney has been reshaped in Apple’s image: brand over everything, and an emphasis on quality.

But it isn’t enough to find the right managers and leave them alone; you also have to know when to dive deep, in part because Disney’s business is such that a hit show or app or toy, if exploited correctly, can propagate throughout the company and become that sought-after thing, a “franchise.”

The article then continues to share an anecdote describing how Iger, who ran ABC prior to becoming president of Disney in 2000, had gotten the Disney board sold on the idea of acquiring Pixar animation studio, created by former Disney animator John Lasseter, Ed Catmull and Steve Jobs.

Pixar had a successful partnership with Disney until the collaboration frayed in a personality conflict between Eisner and Jobs. Iger called Jobs the day he was named CEO, and the two became friends. At the board meeting, Iger presented a 20-year look at Disney animation, which had stumbled after successes like The Lion King and The Little Mermaid.

“I said, ‘I’ve got to fix this, and here are the three choices.'” One was to keep the status quo. The second was to find someone new to run the studio. The third was to buy Pixar. Says John Pepper Jr., then Disney’s chairman: “It’s a meeting I will never forget. He said, ‘Ladies and gentlemen, we must have this.'” The room went silent. The problem, Iger continued, was that it would be very expensive, and he didn’t know if it was for sale.

The only problem was, the board didn’t really know whether Pixar was for sale at the time. Jobs and Iger announced on January 24, 2006 that Disney had agreed to purchase Pixar in an all-stock transaction worth $7.4 billion.

That deal gave Jobs a seat on Disney’s board of directors and turned him into the largest individual shareholder of the company.

Though Iger hasn’t yet disclosed his future plans (“I have made no decisions about life after Disney”), some folks speculate he could run in his native New York City to succeed Mike Bloomberg as mayor in 2013, or that he might be a candidate for governor in California in 2014.

Iger joined other industry leaders in reacting to Steve Jobs’s passing on October 5 of last year, calling him “a great friend” and “a trusted advisor”. The Steve Job’s trust, run by his family, is now the single largest shareholder of Disney.

U.S. television network ABC sparked a controversy with last year’s “A Trip to The iFactory” documentary covering the life inside Foxconn plants that churn out Apple products. Due to ABC’s parent company being Disney, and taking into account that their CEO sits on Apple’s board, some people deemed the documentary a conflict of interest.

I urge you to check out the story in its entirety, it’s a worthwhile read.

As for Iger, I think his seat on Apple’s board can benefit the company in ways more than one, especially as Apple is looking to cut more content deals for iTunes, no?