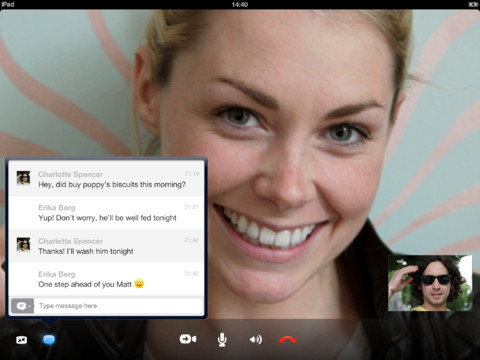 A new version of Skype for iOS apps is out of the gate this morning, offering the obligatory bug fixes and minor UI improvements. While the interface still remains way too clunky on an iPad and not conforming to Apple’s own guidelines, a minor enhancements stands out: you can now finally move your own video preview around. Here, your release notes…

The Skype for iOS apps rock a brand new sign in screen and will now automatically restart if unexpectedly shutdown. The iPhone/iPod touch version also sports the redesigned contacts and messages, unlike its iPad counterpart.

Both Skype for iPhone and Skype for iPad are free of charge downloads from the App Store.

In other Skype news today, an exploit has revealed all user IP addresses.

Do you use Skype on your iOS device?

I tend to run it it on my iPad as it’s still too much of a battery hog on the iPhone.

By the way, just how is Skype for iOS supposed to auto-restart when crashed?