Just as Apple posted its massive earnings, Sprint Nextel, the third largest wireless telecommunications network in the United States, behind Verizon Wireless and AT&T Mobility, published on Wednesday their first-quarter earnings ahead of the bell.

The carrier activated 1.5 million iPhones in the quarter and 44 percent were to new customers, amounting to 660,000 new iPhone subscribers. That wasn’t enough to save the day as the carrier reported a substantial $863 million net loss and operating loss of $255 million.

They lost $0.29 per share on wireless service revenues of $7.2 billion, a seven percent increase year-over-year. The carrier added 263,000 net prepaid subscribers under the Sprint brand – each spending an average of $4.03 more than last year.

Without the iPhone, Sprint would have actually lost 400,000 customers. The carrier’s ARPU was $59.88, a new record. The company added 1.1 million new subscribers during the quarter and it now commands 56 million subscribers in total…

Sprint also lost 192,000 net contract subscribers and its Nextel platform shed 455,000 postpaid customers. The financial metrics still came in better than what Wall Street analysts were calling for: a $0.42 per share loss on revenues of $8.71 billion.

According to a press release, subsidy costs climbed from $1.1 billion in the year-ago quarter to $1.6 billion in the first quarter of 2012, largely due to Apple’s device:

Sales expenses increased year-over-year primarily due to iPhone point-of- sale discounts (subsidy) for devices directly sold by the manufacturer to indirect dealers in which Sprint does not take device title, as well as higher postpaid gross additions. The impact from the iPhone was partially offset by improvements in sales channel mix with a larger portion of activations coming from direct retail channels. 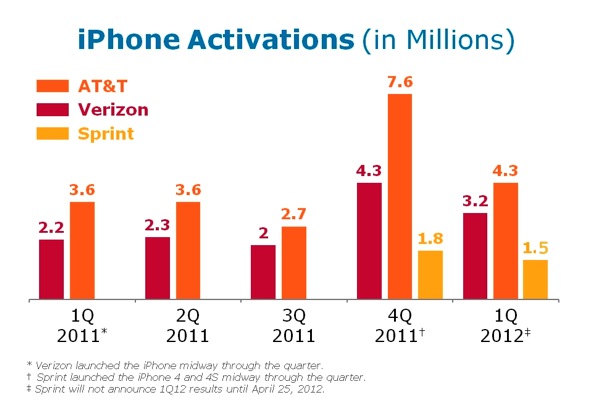 Sprint’s $863 million loss is lower than a staggering $1.3 billion loss during the holiday quarter of last year, when it reported shipments of 1.8 million iPhones. Earlier this week, carriers AT&T and Verizon reported 4.3 million and 3.2 million iPhone activations, respectively.

Sprint bet the company by prepaying a whopping $15 billion last year to land the iPhone, prompting concerns that the company might go bankrupt.

Sprint CEO Dan Hesse argues that iPhone customers are more profitable while on average using less data on their network compared to other smartphone customers.

Note, however, that this could be due to Sprint’s iPhone customers not achieving full 3G speeds as their network exhibits by far the slowest download speeds among the big three carriers.

The company previously hinted that an upcoming sixth-generation iPhone will be eligible for the Unlimited Everything plans on Sprint’s upcoming 4G LTE network. Sprint promised to toll out 4G LTE network in six major cities this summer.

They already have 600 new network sites up and running and are hoping to light up an additional 7,700 sites. In all, Sprint is aiming to bring 12,000 sites live by the end of this year.