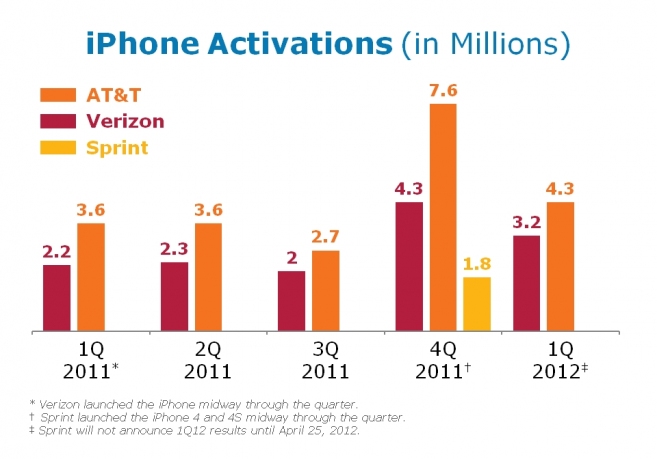 On a more realistic annual basis, it’s a healthy 19 percent growth. And with three out of four smartphones sold in the quarter being iPhones, the nation’s second-largest wireless operator definitely remains the iPhone network no matter how you look at it.

Also notable, AT&T’s quarterly iPhone activations easily beat the 3.2 million iPhones Verizon activated during the first quarter of 2012. Apple is scheduled to report its quarterly earnings today after the markets close, at 5pm Eastern / 2pm Pacific. The company will webcast the earnings call and we will be at hand to relay important tidbits as they happen…

Consolidated revenue for the quarter was $31.8 billion, a 1.8 percent annual increase. Quarterly net income was S$3.58 billion (60 cents per share), an increase over the $3.4 billion net income (57 cents per share) in the year-ago quarter.

The company noted that nearly one-third of its existing postpaid smartphone subscribers are now on 4G-enabled devices, which – in AT&T’s vocabulary, means everyone on their 3G HSDPA network and up.

Despite the notable drop in iPhone activations, Apple’s device represented more than three-quarters, or 78 percent, of the 5.5 million smartphones (a new record for AT&T) they activated throughout the quarter. For comparison, the iPhone accounted for 51 percent of all smartphone sales over at Verizon.

Most importantly, churn rate among their smartphone customers is the lowest among all of their customers. Wireless churn was 1.1 percent, AT&T’s lowest in the past seven quarters.

According to a press release:

With Sprint and regional carriers thrown into the mix, US iPhone sales probably hit the 10 million mark. As international sales continue to represent well over half of Apple’s total sales, Apple could – with some luck – report first-quarter iPhone sales just shy of 30 million units. 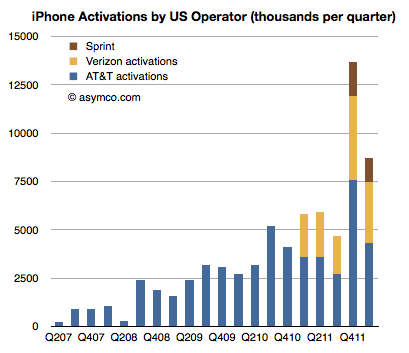 Current estimate for iPhone activations in the US by operator as of Q1 2012.
Chart courtesy of Asymco.

The analyst also noted that iPhone growth in the United States appears to be around 50 percent, which is pretty consistent compared to last year’s 53 percent.

China could save the day for Apple and let’s not forget that the iPhone 4S became available in more than 75 countries by the end of calendar 2011, Apple’s fastest international roll-out for the device.

The iPhone maker will report quarterly earnings after the markets close today.

Are you surprised that iPhone activations at AT&T nearly halved in the first quarter compared to the previous one?

True, nothing compares to the lucrative holiday quarter and it only makes sense to compare sales on an annual basis, but still – it appears to be a substantial decrease.

Should we be worried?