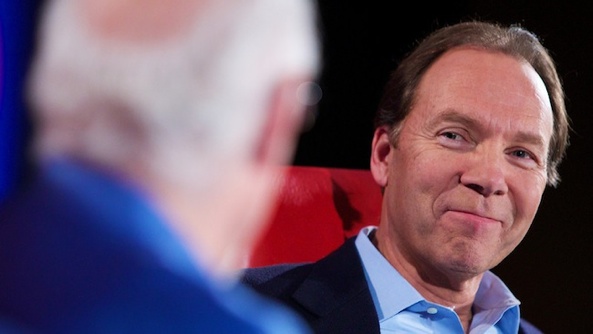 For all the talk about iPhone users being network hogs due to their data-hungry nature, the reality is that Apple’s phone is still stuck in the slower 3G lane while the majority of high-end Android handsets boast 4G LTE networking.

As we learned this morning, 4G LTE support on the new iPad has some not-so-obvious downsides to it as some folks are blowing past their monthly allowance in a matter of days due to high-definition content downloads and streaming on the go.

But the iPhone is different, says Sprint CEO Dan Hesse. The executive said in a video interview with GSMA’s MobileWorld Live blog that iPhone users aren’t as data-hungry as their Android counterparts and thus are more profitable.

His company is “pulling a lot of customers” from rival AT&T and Verizon Wireless, he said, noting that four out of every ten iPhone sales in the holiday quarter went to new customers. He also defended that costly iPhone deal…

Mind you, Sprint’s future is kinda hanging in the air, especially with investors spooked by the company’s decision to drop an astounding $15 billion just to get in the iPhone game last year. The CEO defended the pricey Apple business and said Sprint’s unlimited data plans serve as a key differentiator.

Subsidises are heavy for the iPhone. This is the reason why a high percentage of new customers is important. But iPhone customers have a lower level of churn and they actually use less data on average than a high-end 4G Android device. So from a cost point of view and a customer lifetime value perspective, they’re more profitable than the average smartphone customer.

As for those unlimited data plans? Per additional tidbits over at BGR, Sprint wants to “continue for as long as we can, hopefully forever”. Sprint, the third largest wireless provider in the United States, is also rumored to be deploying an extended warranty plan to its iPhone customers at some point in the near future.

Sprint bankruptcy is a “legitimate risk” for doing business with Apple, analysts say, especially with Apple believed to be jumping on the 4G LTE bandwagon with a sixth-generation iPhone. According to Forbes, the carrier has $1.8 billion due through the end of 2013, $1.4 billion in 2014 and another $2.6 billion in 2015.

Here’s to hoping theirs betting the farm on the iPhone pays off.