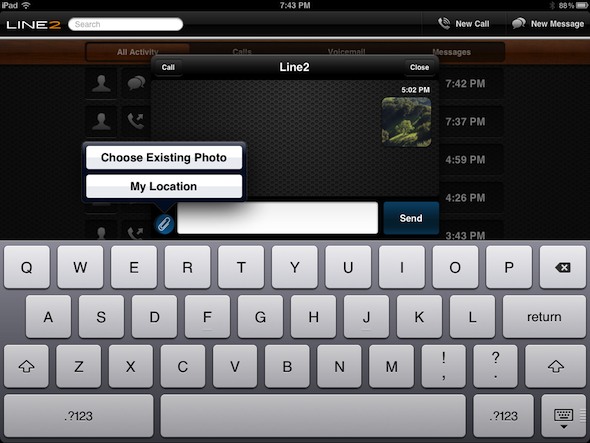 We’ve told you about Line2 before. The VOIP (Voice Over Internet Protocol) service, which launched July 28th last year, turns your iPad (or iPhone) into a second phone line for just $9.99 a month.

We haven’t heard much from the company since then, but this week they’re out with a fairly big announcement. It seems they’ve added an MMS (Multimedia Messaging) feature to the service…

“We have heard your feedback and are happy to announce that Line2 now offers picture and location sharing on iOS! Video is coming soon!

If you send an MMS from a Line2 number to another Line2 number, the attachment will appear directly within the application.

If you send an MMS from a Line2 number to a number outside of our network, your outgoing MMS will be sent as a link connecting the viewer to your image hosted outside of the application.”

The service’s big downfall is that you can’t receive an MMS from a line outside of Line2’s network. They attribute it to “anti-competitive behavior” from the cell phone carriers, but no matter how you slice it, it’s still a major inconvenience.

Regardless, for just $10 a month, this is still a decent solution for turning your iPad into a 2nd phone line. All you need is iOS 5 or higher to take advantage of the new MMS feature. You can download Line2 from the App Store for free.