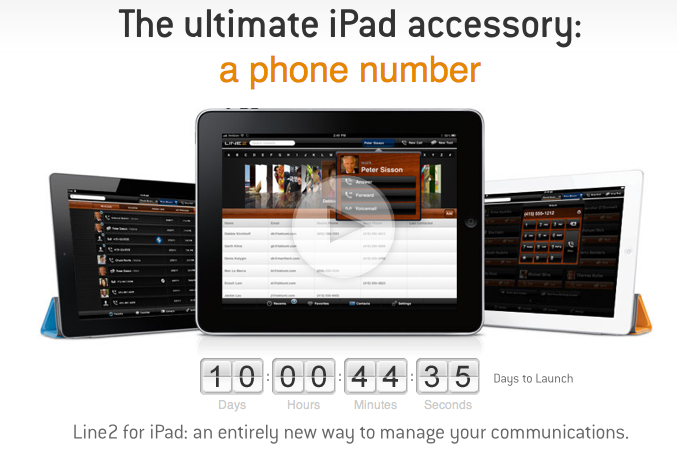 While the iPad’s considerable size doesn’t particularly lend itself to being a telephone, that hasn’t stopped many from wanting to use it as one.

A new app promises to turn our favorite tablet into a 9.7″ smartphone, and all for $10 per month, according to AppAdvice.

Starting July 28th, we could be making and taking telephone calls from our iPads using either the in-built mic and speaker, or a bluetooth headset…

Coming from Line2, little is known about the app, with just a countdown timer and graphic appearing on the company’s website. The current plans are listed though, pointing to a basic plan starting at less than $10 per month – that’s certainly competitive with ‘real’ cell phone providers.

What we find ourselves asking though, is this: how is this really any different to Skype?

Everyone’s favorite VoIP provider has been on the verge of releasing an iPad app for a couple of weeks now, and with Line2 also using the VoIP system, we can’t help but think that the only real difference here will be calling plans.

Until we see concrete offers though, we’re just guessing what both companies will offer when it comes to iPad telephony.

Keep in mind that there’s also a jailbreak app out for the iPad, called PhoneItiPad, that does nearly this exact same thing. Instead of a monthly fee, PhoneItiPad only costs one payment of $19.99.

Which will you choose?