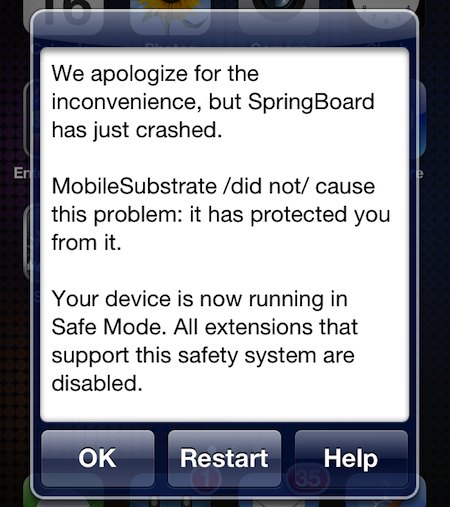 Saurik is on a roll with his Cydia updates today. Earlier this morning he rolled out a new version of WinterBoard. And now we’re going to take a look at the also-new-today Mobile Substrate update.

For those that aren’t familiar with it, Mobile Substrate is the de facto framework that allows 3rd-party developers to provide extensions to system functions. And it just received a killer new feature…

“As of version 0.9.3997, you can now disable Substrate entirely by holding down Volume Up as the device boots.

This feature allows you to bypass horribly broken extensions (ones that prevent the device from starting up at all) that you may have installed so you can open Cydia and uninstall them.

To support devices that do not have a Volume Up button (the first-generation iPod touch), you can alternatively hold down the “Clicker” (not Volume Up) button on your headset or earphones.”

This is a great failsafe for jailbreakers who like to experiment with a lot of new tweaks and extensions. It kind of reminds me of when you had to hold down “F8” when starting Windows XP to get into Safe Mode (before I became a Mac person).

Unless you’ve gone out of your way to remove it, chances are you already have Mobile Substrate on your device. To update it, simply launch Cydia and scroll to the top of the list in the Changes tab.