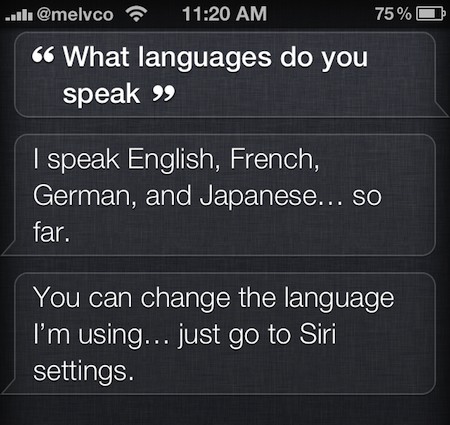 Last month, Apple released iOS 5.1 to the masses. The update included few new features, but it did bring Japanese Siri support. This brought the digital assistant’s number of compatible languages up to a whopping… four.

But if Siri doesn’t currently support your language, that doesn’t mean you’re out of luck. Developer Kunal Kaul took matters into his own hands and taught Siri to speak Hindi — with a little help from his proxy server…

Using proxy servers to enhance Siri’s capabilities has been a popular hack since the digital assistant debuted last October. Early on, developers used these servers to enable Siri to control lights, TVs and other appliances.

For those interested, we have an in-depth tutorial on how to setup a Siri proxy server. But don’t get your hopes up about teaching the assistant to speak Hindi just yet, Kaul says there is still “lots of work to be done.”