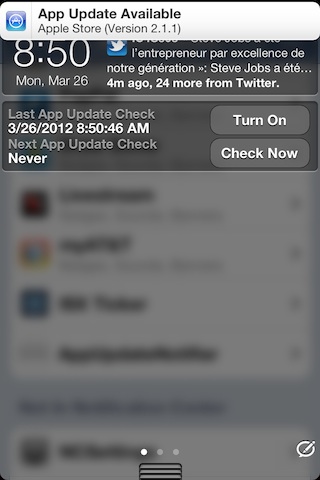 First there was CydiaBulletin, and then there was the dead on arrival Aptdate. These jailbreak tweaks were conceptualized and/or created to provide notifications whenever an app or tweak had a pending updated waiting in Cydia.

Due to traffic concerns, it’s unlikely that either of these tweaks will ever see the light of day. That’s unfortunate, but it’s the reality of the situation unless the developers can come up with a way that won’t put too much stress on the repo servers.

But what about the App Store? This sort of functionality would be useful for pending App Store updates as well, would it not? Thankfully, someone was listening.

Check out our video walkthrough of AppUpdateNotifier, a jailbreak tweak that provides banner notifications when updates are waiting in the App Store…

Once installed, AppUpdateNotifier can be setup to query the App Store at specific time intervals. For those of you who are impatient, you can force a query via a handy Notification Center widget.

If AppUpdateNotifier senses that updates are waiting, you will receive a banner notification telling you which apps are waiting for updates, along with their version numbers.

Tapping on the banner notification will take you directly to the app in question on the App Store.

AppUpdateNotifier works well, and I was very pleased with how it performed during my tests. For $1.49, you may deem this tweak worth purchasing if you wish to keep better tabs on your App Store updates.