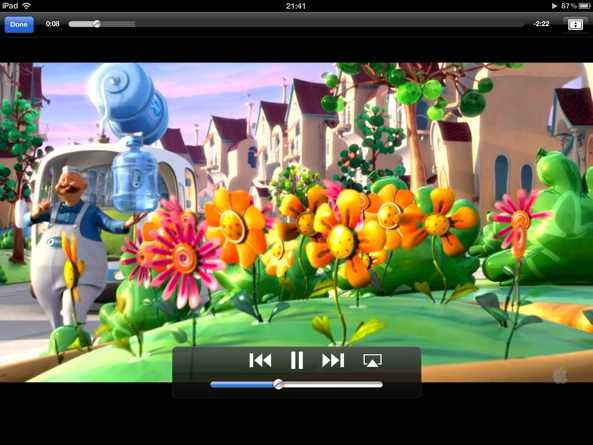 Ahead of the original iPad introduction in the April of 2010, the blogosphere had been abuzz over an unnamed Hollywood exec who allegedly saw a prototype in person and claimed the product would be awesome for watching movies. It ended up being quite enjoyable for this purpose, but hardly awesome due its modest 1024-by-768 pixel resolution.

Fast-forward to today and the new iPad, which has a million more pixels than an HDTV, is perfect for watching Hollywood movies in all their 1080 glory. As developers of popular apps update their offerings with Retina support, Apple isn’t wasting time neither. Yesterday, the company issued an update to its iTunes Movie Trailers app, basically a pretty-fied frontend to its movie trailers page released last October.

At the same time, Netflix pushed an update to its video streaming client for iOS with support for Retina graphics. Though the program does not enable high-definition video streaming yet, it’s in the works and should follow “soon”…

The free iTunes Moview Trailers app, a universal binary for your iPhone, iPod touch and iPad, “is now designed for the spectacular Retina display on the all new iPad”, Apple says. The program also enables 1080p trailers and video quality “is impressive to the point that it makes the app addictive”, per 9to5Mac.

Netflix updated its iOS client on Wednesday, but only with support for Retina-optimized user interface. Don’t worry, though – video streaming in full HD 1080p quality is in the works and will “follow later”, according to the company’s message on Twitter.

For now, according to the Netflix Mobile team on Twitter, Netflix movies stream to your device in standard definition at a resolution of 640-by-480 and 1350Kbps as they are “actively investigating 1080p support”. Hopefully, it’ll be sooner than later.

For all the talk about Retina-optimized apps on the new iPad, 1080p video streaming is actually the primary benefit I’m looking forward to. With screen this dense, the new iPad is actually the first iOS device from Apple to support full quality high-definition video.

That’s a pretty big deal in my book. How about you? Are you excited about 1080p video on your new iPad? Or would you rather sacrifice some pixel count for a 16:9 screen aspect ratio?