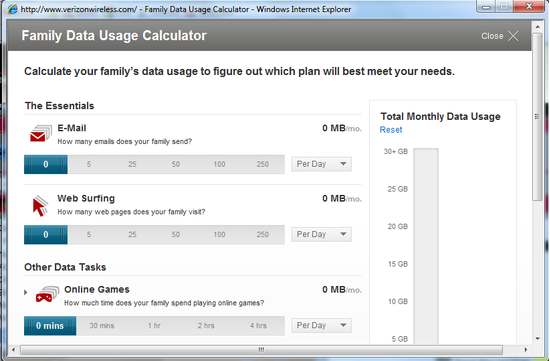 A new plan from Verizon that will allow its customers to share a data plan between their iPhone and iPad has been rumored to launch for quite awhile. In May of 2011, Verizon’s CFO Fran Shammo hinted towards it rolling out, but offered no time frame.

In January, we saw a picture of Verizon’s back-end that hinted to the plan launching soon. Today, a screenshot of the family data usage calculator that will be used when first signing up for the plan has leaked, showing that the plan may be launching soon…

A screen cap shared with us suggests that Verizon, at least, is moving ahead with the back-end upgrading that will be necessary to implement a shared data plan. While we can’t vouch for the images beyond what is seen below, it appears to be an online calculator available for families to use to figure out whether a shared data plan is right for them.

The family data usage calculator will assist customers in creating their new data plan. The new plan will allow users to pay a flat fee each month for a set amount of data, which can then be used up on both the iPhone and iPad. Just like current data plans, there’ll be overages if a customer reachers their cap and hopes to use more data during the billing period.

Besides the ability to share the allotted data between the iPhone and iPad, the data could also be shared between a family. This will work well for a family who doesn’t use a ton of data.

AT&T, the nation’s second-largest carrier, has also been rumored to launch a similar shared data plan. We’re assuming both carriers would launch it around the same time.

Pricing for the new plan hasn’t been revealed as of yet, but the recent leaks point to it launching soon. We thought it’d launch with the new iPad, however that’s not the case.

Are you excited for this type of plan?