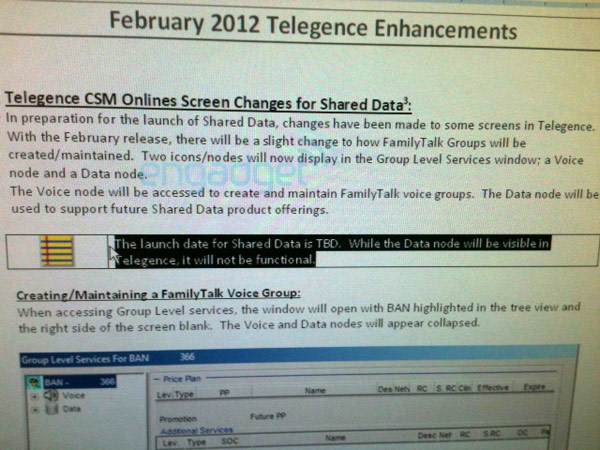 We’ve known about AT&T’s new data plan that would allow users to share data between their iPhone and iPad ever since AT&T’s CEO Ralph de la Vega teased it last year. Many customers have been excited for it to launch, but there hasn’t been any word on an official release date.

The plan has been rumored to launch soon, and it looks to becoming even closer according to a leaked internal screenshot from Engadget…

According to the memo seen above, Telegence has been tweaked to include a new group-level data feature node “in preparation for the launch of Shared Data.” This verbiage seems to suggest the new plans are coming in the very near future, but the communication is quick to point out that the launch date has yet to be determined. Unfortunately, since the new adjustments aren’t functional just yet, it could simply mean the company’s beginning the first wave of crucial internal testing.

The internal memo shows that AT&T is tweaking their internal systems “in preparation for the launch of Shared Data.” Sadly, the internal memo doesn’t give an official launch date, but does hint that it is coming closer.

Verizon Wireless has also been rumored to launch a similar plan. Verizon’s CFO Fran Shammo hinted towards the plan in May of 2011, a few months before AT&T said anything.

A shared data plan between the iPhone and iPad makes sense, especially with the release of the iPad 3 coming soon in a few weeks. Sadly, there won’t be a true unlimited plan for either Verizon nor AT&T.

Would you purchase a shared data plan?