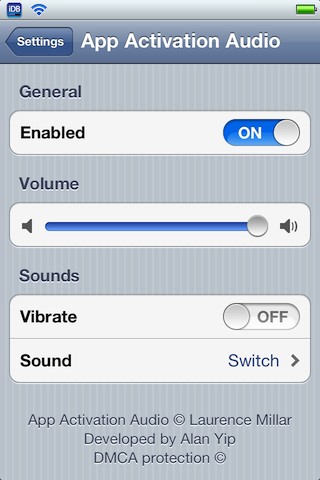 To be honest, I have no idea why anyone would want sound effects to trigger every time they launched an app, but I’m sure someone out there has been longing for such a feature.

App Activation Audio is a jailbreak tweak that does just that — it is able to output one of about 20 sound effects every time you open an app.

Check out our video walkthrough of App Activation Audio straight ahead…

As I alluded to, I think such a feature is silly for two reasons: #1 It’s annoying to hear a sound every time you launch an app. #2 It has to be a battery drainer.

With that in mind, I do like App Activation Audio’s multilayered sound effects. Indeed, some of the sound effects included have multiple layers so that they output a different effect each time you launch an app. Check out our video for an example, it’s actually pretty cool.

But that one redeeming factor just isn’t enough to warrant paying $1.99 in my book. Even if it was free I couldn’t see myself using such a tweak. I’m not saying it’s horrible; it works very well, but it isn’t something I find to be practical at any level.